A visually stunning presentation comes to Shakespeare Theatre Company for a limited engagement in Basil Twist’s Petrushka. A wild and beautiful execution of unique puppetry swirls together in this classic Russian ballet. It is the tragic love story of three puppets who are part of a Russian Carnival. These puppets are no ordinary puppets; much like Pinocchio they are magical living creatures with all of the expressions and emotions of humans, especially Petrushka. Performed by an amazing team of talented puppeteers this show provides magic and wonderment for audiences of all ages.

The show opens with a strange series of images floating in the darkness – boards swirling like flowers, half-moons and semi-circles wafting over one another. This, however interpretive, does not seem to have anything to do with the ballet itself, other than being set to the music composed by Igor Stravinsky, though it is very aesthetically pleasing. In a sense this opening attachment almost detracts from the show as it doesn’t seem to show a large connection to the story of the puppets. It is a dreamy display of puppetry— as the objects and shapes float seemingly of their own accord in the darkness, but it seems just a touch superfluous.

When the carnival starts audiences are amazed with the large disembodied hands playing various instruments, swirls of flittering sheets that in their movement almost look like birds, and floating bouquets of flowers. We see these amazing disembodied hands again throughout the piece as the three magic puppets are introduced. It creates the illusion of a puppet master with these hands suspended overtop them as they dance.

The audience is treated to a delightful dance from three breath-taking puppets. There is the Moor, who has cords of black burly muscles and golden glowing eyes, the Ballerina with delicate painted features and long slender legs, and then there is the namesake of the show, Petrushka. An emotional puppet with eyebrows that move to help change his expressions – this puppet is the most expressive of the three and is prone to tantrums with frantic outbursts. The puppet has a solo dance during the intricate dance that the three share, doing splits and flips in the air, looking as if he is an actual human being made of wood and cloth, with a flair for the acrobatic.

The use of their shadow technique to keep the puppeteers completely hidden really heightens the magical experiences of these puppets, letting them live out the story as it unfolds and you even start to feel the emotions that Petrushka generates.

Petrushka is an enchanting little tale with all the wonderment of the youthful and all the complex interactions of those in wiser years. 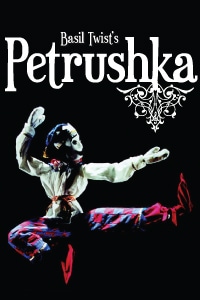 Be sure to pop in and catch Petrushka before it pops out of town.

Featured Picture: Duet between the Ballerina and the Moor. Photo by Richard Termine.