Lions, and tigers, and bears! Oh, my!

Every arts organization in the country seems to be looking for the key to attracting multi-generational audiences to their performances. I would like to start this review by saying that I saw what I consider to be the perfect audience at Wootton High School on Sunday, March 18, 2012, at 2 pm. Everybody was happy and well behaved. In roughly equal numbers, kids, parents, and grandparents filled the seats. They were there to see Dorothy, a Scarecrow, a Tin Man and a Cowardly Lion …Glinda the Good Witch, the Wicked Witch of the West, a Wizard, and the most darling little Munchkins imaginable.

The Wizard of Oz is an American treasure. The good news about this is that virtually everybody knows and loves this timeless story. The bad news is that the performances of Judy Garland, Ray Bolger, and all the iconic cast of the famous 1939 MGM movie in which they starred are firmly entrenched in our minds. Inviting comparison is unwise, and Speck was smart to caution her young cast to portray their characters and make them their own rather than attempting to channel performances of world famous actors.

Kayli Modell was well cast and always believable as Dorothy. She is a fine singer and dancer, but it was her honest emotion and acting that pulled me into the story. I was very impressed with and humored by Mitchell Myers, whose stereotypical neurotic New York Jewish lion seemed as if he should join Woody Allen’s characters in therapy, and I also found Lauren Goldberger, who offered up an unexpected citified and snappy Almira Gultch, who sounded as if she may have been transported to the middle of Kansas in some earlier tornado, to be very interesting. Corrieanne Stein was beautifully serene in her role as Glinda, the good witch. I loved Adam Uslan as the Scarecrow. His youthful energy was constant, and he was very funny, as was his counterpart, Joshua Yu, in the role of Zeke. Elgin Martin was exceptional as the Guard. I enjoyed his voice, his eyes, and his sassy attitude. Olivia Speck turned in a wonderfully energetic and impressive performance as the Munchkin coroner. And then there was Toto. What a great dog … and so well behaved that he easily could have stayed onstage throughout the entire show! He could not have been better cast, and he was simply irresistible as he popped his head out of baskets and from behind curtains.

The Munchkins were simply adorable in this performance, but they were much more than cute. They sang, danced, and acted like pros. Frankly, it is not easy for a director working on a high school production to include young kids. The logistics and supervision alone offer huge challenges, not to mention directorial considerations that come into play when working with a cast of such varied age and experience. This said, I love to see kids being introduced to and getting involved in the performing arts at young ages. Research shows that they will be more successful in school and more successful in life as a result. Congratulations to Jessica Speck and her directors for their ongoing support of young children and for getting them hooked on the arts at an early age.

The cast in this production was very large, with many kids performing multiple roles. While they could make stronger entrances and cleaner cut-offs when singing, they were vocally strong, fun to watch, and full of energy. The Wootton orchestra, under the direction of Carolyn Herman did a fine job with a challenging musical score and they are to be congratulated for their fine performance.  I also enjoyed the choreography, which was simple, fitting, and well-executed.

In a show that can only be described in terms of one favorite moment after the next, my very favorite had to be Scarecrow singing “If I Only Had a Brain.” I loved Scarecrow, and the Scarecrow “Pips” were a highlight of the show.

Though there were some minor tech issues in Sunday’s performance, there was much to praise. For starters, nobody would expect to see characters flying across the stage in a high school production, but to the delight of all they did. Artistically, the costuming in this production was consistently superior in its creative design, and the colors could not have been better. The murals were wonderful, and I loved the field of cornstalks.

I really enjoyed and highly recommend this performance, and I would go back to see a second performance if I could. Three more performances remain. I encourage you to gather friends and family members of all ages and treat yourselves to the timeless treasure that is The Wizard of Oz. You’ll be glad you did. 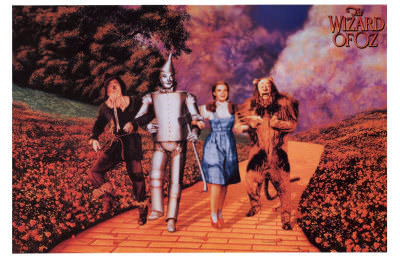 The Wizard of Oz  has three remaining performances: March 23 and Saturday, March 24 at 7:30 pm; and Sunday, March 25 at 2pm at Thomas S. Wootton High School in the Wootton Center for the Arts – 2100 Wootton Parkway, in Rockville, MD. Reserved Seats are $15 and General Admission is $10. Order you tickets online.

Watch a preview video of The Wizard of Oz.