On April 2, 3 and 4, Constellation Theatre Company will venture into a new galaxy of entertainment when Helen Hayes Award recipient and nominee Tom Teasley plays a live original score to the 1926 film, The Adventures of Prince Achmed.

Inspired by the Middle Eastern aspects of the film, Teasley, a world renowned percussionist, creates an exciting soundtrack for this magical 1926 film. The first animated feature length film, The Adventures of Prince Achmed was created by German visionary Lotte Reiniger using a silhouette technique inspired by shadow puppetry.

In the film, a wicked sorcerer tricks Prince Achmed into riding a magical flying horse, which he then uses to embark on many adventures. While travelling, Achmed falls in love with the beautiful Princess Peri Banu, and must defeat an army of demons to win her heart. 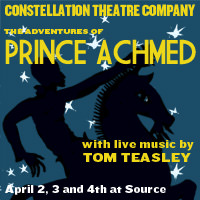 Teasley’s innovative world music score is based upon his collaborations with indigenous musicians in Bahrain, Iraq, Saudi Arabia, the West Bank and Jerusalem during his work as a Cultural Envoy for the U.S. State Department.  He received the Helen Hayes Award for Outstanding Sound Design in 2010 and 2011 for his collaborations with Constellation Theatre Company on Crazyface and The Ramayana.  He is nominated for the same award in 2012 for his performance in The Green Bird and he can be seen in Constellation’s upcoming Metamorphoses in May.

There will be optional post show discussions after each performance.

THE ADVENTURES OF PRINCE ACHMED

A breathtaking animated film by artist Lotte Reiniger and original score will be performed live by Tom Teasley on Monday, Tuesday, and Wednesday April 2, 3, 4 at 7:30 pm at Constellation Theatre Company at Source – 1835 14th Street, NW, in Washington, DC. Tickets are only $20, and can be purchased online, or by calling (800) 494-8497.

Watch a trailer of Tom Teasley’s original composition of The Adventures of Prince Achmed.