Teresa: What was your first personal exposure to Jekyll & Hyde?

Have you seen the production staged before?

Justin: The first time I saw the show was its original tour before it opened on Broadway. It was at the Morris Mechanic in Baltimore back when I was in high school. I thought the show was great. The music was fantastic and so powerful. Plus it was set to the backdrop of a great storyline. The mysteries and legends of Victorian London have always fascinated me. Then after the show opened on Broadway, I had the chance to see it again and was able to see the way they had changed the show from the original tour. While the Broadway show was very good, the tour was my favorite of the two. In a way it was darker and somehow more powerful. I think it had a lot to do with the fact that the sets were more abstract than on Broadway so the focus was more on the music and story than sets and all the things added or changed to make it a long-running Broadway show. Which it was, considering how most shows only run a couple of years at most.

How have you made this classic your own at WOB?

I went back and reread The Strange Case of Dr. Jekyll & Mr. Hyde and drew on things from Robert Louis Stevenson’s original story. And I have gone back to a more minimalistic set to once again focus on the music and the story.

I know that you sometimes perform in the WOB productions, so did you have any desire to be onstage for this one? What led you to direct?

The truth is that I much prefer to be behind the scenes. I really have no great desire to be onstage. I like being a producer and on those rare occasions a director and put the whole show together. As far as being onstage, I also know my limitations and a singer I am not. For a show like Jekyll & Hyde, you need singers.

All of the shows I have directed in the last several years have been comedies (and all Western Maryland and/or regional premieres) – Mel Brooks’ The Producers, Dirty Rotten Scoundrels, and The Drowsy Chaperone. After doing nothing but comedies, I wanted to work on something more serious and, in a way, more epic. Jekyll & Hyde is in a completely different category than Dirty Rotten Scoundrels (which is still my favorite musical though). I’m also not slated to direct anything in the foreseeable future, so I wanted to do something “big” before I started focusing once more on producing.

The role of Dr. Henry Jekyll/Edward Hyde is quite demanding, so tell us about the audition process and the actor you chose.

When it comes to auditions, I tend to go with my gut. I just “know” or get the feeling who is right for a certain role. That is exactly what happened in this case. There were several actors in the mix and I had auditioning for Jekyll/Hyde and when the auditions were over, I just knew who I wanted to cast – Matt Curtis.

And how about the female leads, Lucy and Emma?

This is where it got tricky. I am not a fan of call backs. I like to cast a show and get to work. But this time, the entire show was cast and I still could not pick my Lucy. For over a week I had four resumes and headshots sitting on my desk staring at me. The problem was that I had worked with each of the actresses before so knew what all of them could and couldn’t do. Any director would tell you they would love to role all of the people who audition for a role into one person and take the best of all of them. This was one of those instances. So after a long week of sleepless nights and calls and discussions with my creative team, I finally said I needed to see all of them one more time and have them do some work with Matt (Curtis – who had been cast as Jekyll/Hyde).

So one Sunday after a matinee at the theatre, I brought everyone in and had them read and reread scenes – sing different songs. I wanted to make sure I saw everything from them. By then end of the call back, I was certainly leaning in one direction. What clinched it for me though was when Jessica (Billones – who was cast as Lucy) sang “Someone Like You.” When she finished singing, I realized I had tears in my eyes. She did things with the song that I could never have directed. Even tonight at rehearsal, after one of the numbers between Lucy and Hyde, my choreographer, Amanda Patten – who is one of my closest friends and the only choreographer I will work with when I direct – turned to me and said, “There’s no doubt she was the right choice.”

What is your favorite scene and or song from the show?

On any given day or at any given rehearsal it could be a different number. But the one that I always seem to come back to in “Façade.” The number is the first time the entire cast is on stage and it’s so powerful. I just love watching how it has turned out and, many times, have the cast run the number over and over again because I like it so much.

What scene has proven to be the most challenging to direct?

You would think that with a show like Jekyll & Hyde, there would be specific scenes that were difficult. You have to deal with one actor “transforming” from one character to another without it looked complete ridiculous. You have the number at the beginning of the second act which is a nine minute number called “Murder!” where four characters get killed by Hyde while the entire cast sings and scenes happen in between verses. But what I found the most challenging was the transitions from scene to scene, setting to setting, and song to song. I wanted to make sure the show flowed and moved smoothly. I never wanted the show to slow down.

How would you describe your directing style and what genre is your personal favorite to direct?

It’s funny because this is something I am always talking to people about. There are so many different styles of directors. I always describe myself as an “audience’s director.” Since I really don’t consider myself a director, like I said before, I am a producer at heart, I tend to look at things through the eyes of the audience. After all, it is all about the audience. So if I am directing a show and I see something that as an audience member I would think made no sense or didn’t work, I change it or fix it. That’s why keeping a show moving is so important to me. I never want to audience to get bored or lose interest in what is happening. Granted, it always comes down to the audience and making sure they are happy. But I always have the audience in mind when I am directing. As far as the types of shows I like to direct . . . I can’t honestly say I prefer comedies over dramas or dramas over comedies. I have done more musical comedies over the years but I tend to pick shows to direct that I personally like or have some sort of connection with. Not just one style of show. Because after Jekyll & Hyde, the next show I would like to direct is The Addams Family. 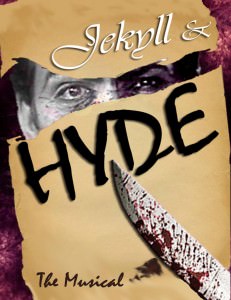