When you dance in a Twyla Tharp show, you’ve got to do more than pirouettes or pretty ballet steps. Tharp’s choreography is unique. It’s gutsy, quirky and Olympics-competition ready with its bag full of flips, backbends and cartwheels galore.

So it’s a bit of a big deal that Howard County ballet-trained Ashley Blair Fitzgerald, a protegee of Donna Pidel at Ballet Royale, is a featured dancer in Tharp’s Frank Sinatra musical Ballet Royale at the Kennedy Center April 18-29th.

“I’m in the big numbers so I have to be in the best shape when Twyla (Tharp) challenges you every way possible,” Ashley stresses on the phone, following her opening night performance in Baltimore in February. “She (Tharp) comes in often to check out the choreography and make sure we’re on tract.”

After graduation from Centennial High School in Ellicott City in 2002, Fitzgerald studied theatrical arts at the prestigious Boston Conservatory of Music. A year or two later, she left ‘Beantown’ for the ‘Big Apple’ and a promising career in New York City show business. Her first professional gig was the The Radio City Christmas Spectacular, followed by a national tour of Fosse (which stopped in DC). Other musicals included a tour of Cats and Dirty Dancing, and the 2011 televised Tony Awards program where she appeared alongside actor Neil Patrick Harris in Company. Now she’s in the musical she calls, “the best job of my career… and coming back to the area where I grew up…well, that’s special.”

But the heart of the production is in the dancing, and for that Tharp, a 2008 Kennedy Center honoree, has once again assembled a first-rate ensemble. Look for Ashley’s high-flying leaps in the opening number. Or her luminous swagger when she drapes herself across her partner in an unforgettable duet.

This show features a rotation, much like a ballet company, and Ashley dances on average five out of the six shows per week. Her favorite part is Kate where the redheaded dance dynamo is partnered by Anthony Burrell in the Sinatra classics, “That’s Life” and “And One For My Baby (and One More For the Road).” These two very sexy dances were originally created by Twyla for Mikhail Baryshnikov and Tharp, herself. Now Fitzgerald gets to strut her stuff to ‘Ole Blue Eyes.’

“I love dancing to Frank Sinatra music,” Ashley reminds us. “My grandmother met him when she was singing in a band, and our family listened to his songs for as long as I can remember.”

Come Fly Away is 80 minutes of incredible non-stop physical movement – a shoulder roll here, a slap on the thigh there, and enough swoops and swirls to have worn out Fred and Ginger in their prime. The show itself is a huge workout; however, Ashley points out there are two required ballet classes a day, taught by cast members, one from the New York City Ballet, the other London’s Royal Ballet.

“Five hours of my day is geared towards physical activity,” Ashley chuckles on the phone.

On her days off in DC, she will spend time with her fiance, her high school sweetheart, Ryan Kelly, who also grew up in Ellicott City and reportedly has been listening to Frank Sinatra songs on his car radio. They plan to be married in August and live in Maryland, soon after the musical ends its tour in Pittsburgh. 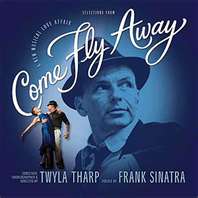 Watch a preview montage video of Come Fly Away.