Crown of Shadows: the wake of odysseus, written by Jason Gray Platt and premiering at Round House Theatre, is witty and surprising. Gray Platt, at twenty-seven, is already quite accomplished, with an admirable command of language and an undeniably fresh voice. His play was brought to Round House through a collaboration with the DC play development lab, The Inkwell, and Round House Artistic Director Blake Robison deserves applause for premiering a young playwright’s work.

The play’s greatest delight is Gray Platt’s use of language, which is interesting, skillfull, and gripping, and his sense of rhythm, which is about perfect.  He juxtaposes references to Zeus with the most contemporary slang. Ancient Greece, negotiated with valley girl talk and teenage profanity, gives rise to moments of delicious verbal humor and well-wrought put-downs.  Telemachus, for example, calls his mother, Penelope, a “party favor that puts out.”

Although the play is a retelling of The Odyssey, detailing Penelope and her son Telemachus’ struggle as they wait for the warrior’s return, the costumes, language, and references set the play squarely in contemporary culture, and the noble ideals that drive the characters of Homer’s Odyssey are entirely absent. The chief of police says, “We are all parasites.  The question is who can suck the most blood.” If the play has a theme, that statement encapsulates it. Speaking to a group before the show, Gray Platt said he had updated the story for our times, moving away from the Greek ideals of patience and loyalty. Indeed, in his play, a thirst for power drives the actions of all the characters.

In a post on the Round House blog, Platt Gray links the play to the wars in Iraq and Afghanistan, the fact that many children in our country, like Telemachus, are growing up fatherless. The association is tenuous, however; the play is concerned more with power than loss. If it holds a message relevant to our country’s recent wars, it is that however much we might vie for power, death comes for all in the end; there is no guard against it.

Platt Gray also states, “Theater as a medium is about compassion before anything else. It is about confronting humanity in simultaneous time and space, experiencing, for a brief time, what someone else experiences, and thus participating in the most vital exercise any of us can undertake—to forget ourselves and live as another, in the hopes of expanding the reaches of empathy.” In this play, though, the characters are nearly impossible to empathize with, in spite of fine acting. Deborah Hazlett delivers a standout performance as Penelope, Jefferson A. Russell has four separate roles, all of which he plays with panache, and Michael Morrow Hammack portrays the different facets of the moody and conflicted Telemachus well. Julia Proctor plays a convincing enough Calliope. But, as Platt Gray himself notes, the play has no protagonist. Perhaps that is the first choice that creates a sense of distance for the audience. The second is that the characters are all conniving, enigmatic, and ultimately unlikeable. And the third is that the shifts in loyalties are lightning quick, and the characters’ motives are murky. The quick twists and turns of the plot do not allow a sense of inevitability or even causality to build. And while the action is therefore surprising, it also seems random and hollow.

As Peter Marks noted in an article in the Washington Post, what Inkwell director Jill Burgess and other readers of Inkwell submissions look for is not necessarily the next August: Osage County, but a promising voice, with a view to what the writer has the potential to write ten years from now.  Inkwell wants “plays that push the boundaries” and found such a play in Crown of Shadows: the wake of odysseus.

This is a play that will probably either enchant you or annoy you, depending on what you’re looking for from theater. Certainly it is new and is, in its own way, challenging. It may be worth seeing for that reason alone. 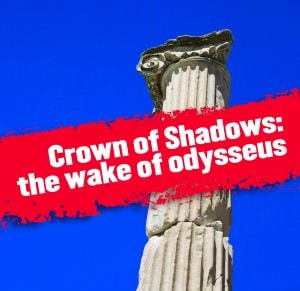