Erin Gifford, Director of Communications and Development of The Puppet Co., tells us about this year’s Playhouse Puppetry Slam! and The Family Day Festival – both happening this Saturday in Glen Echo Park.

“On Saturday, April 28th, it’s going to be a busy, busy day at The Puppet Co. In Glen Echo Park, The Family Day Festival will be going on, marking the opening day of the Carousel for the season, and the Puppet Co. will be participating with hands-on puppets. It has a Tiny Tots show as well as two performances of Pinocchio during the day. That’s a lot of fun for a day in the Park with the kids! But, the fun doesn’t stop there. The Puppet Co. has something for the adults because yes, puppets are for grown-ups, too! 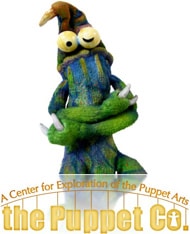 After playing in the sun all day, the kids will be ready to go to bed early.  Book a babysitter and come back to the Park for the Playhouse Puppetry Slam! at the Puppet Co.!  It’s an evening of puppetry for adults, with content ranging from the raunchy and risqué to the tender and tear-jerking.  You will laugh, you will cry, you may even be shocked and amazed. You will even enjoy the live jazz band

Slam director Eric Brooks says to expect a range of puppetry styles, from table-top to marionettes to improv object theatre.  “We’ve got an amazing lineup this time, including Basil Twist from New York. Twist has gotten quite a bit of attention in D.C. over the past month with the Twist Festival DC, and we feel privileged to have him perform with us,” says Brooks.

OK, now you’re probably sitting there wondering, what is a puppet slam? Is it like a poetry slam?  Well, yeah, kinda. But with puppets. Brooks says this is an opportunity to elevate awareness and appreciation for important, artistic works in the puppet arts, and because of the general subject matter (i.e. death, nudity, politics, etc.), it’s definitely NOT for kids.

Brooks pulls upon his network of friends and professional performing artists to bring performers from all over the East Coast to perform their pieces. “Performers have come as far as Ohio to this slam,” says Brooks. “And they were some of the most memorable, but one of my favorite parts is when a newbie puppet artist appears.”

Several performers will be new to the Playhouse Puppetry Slam!, including local puppeteer David Greendfieldboyce. Greenfieldboyce is excited to participate in the Puppet Co.’s Slam; he’s performed in Black Cherry Puppet Theatre’s Slamwich, located in Baltimore, and he’s glad to be able to perform his two pieces for larger audiences.

When asked what made him want to be a part of the Playhouse Puppetry Slam! Greenfieldboyce responded, “Why wouldn’t I want to do it?  I get to see other people’s shows and meet other puppeteers.”

The Playhouse Puppetry Slam! is excited to have audience favorites returning as well. New York puppeteer Carole D’Agostino, who has credits in television, film and stage, will bring back her ever popular, “Object Theatre Time!,” where she collects items from the audience (a shoe, a passport, a water bottle, a bottle cap have been a few from past slams), then creates a smart, from-the-hip piece on the spot!  D’Agostino is a veteran puppet slam performer in and out , having performed in over 56 slams in at least 20 venues. “You’ll see people fail and succeed in one night.  You have no idea.  You see a little of everything. It’s a risk for everyone involved, and that’s kinda fun.”

One of the key points of the Playhouse Puppetry Slam! is that it’s just as important and fun for the audience as it is for the performers. D’Agostino explains that it’s a very supportive environment, with the performers helping each other prepare.

“Yours [Playhouse Puppetry Slam!]  is a real professional facility.” Describing other slams that didn’t have toilet paper but did have the courtesy to provide greasy pizza and flat soda, she says, “You have everything AND: lighting, sound, food, toilet paper. It’s the full package. That’s why I’m willing to drive 4 hours for a puppet slam.” She says that the D.C. community should come to the Playhouse Puppetry Slam! “because it’s affordable and fun – and because it’s the new vaudeville.” She’s got a point. 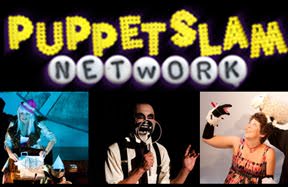 The Puppet Co. is proud to provide great experience and to be a part of the ever-expanding Puppet Slam Network, headed by Heather Henson (name sound familiar? Yep, she’s the daughter of world entertainment mogul Jim Henson). “Puppet slams have been around since cave people – probably called ‘cave slams,’” says Marsian De Lellis, Puppet Slam Network Coordinator, explaining that cavemen needed to somehow understand how to get food.  “Unfortunately,” says De Lellis, “putting on a slam is a bit more expensive today than it was in caveman times, and Henson and the Puppet Slam Network saw a way to help.”

In the mid-1990s, Henson quietly began handing out funding to help with puppet potpourris, cabarets and slams mostly taking place in the northeastern part of the U.S.  When De Lellis came on board, it became a stabilized organization, The Puppet Slam Network, which now helps to fund puppet slams all over the U.S. and beyond.

“I would love to see it grow with corporate sponsors. There’s a real hunger for people to go touring.  I’m encouraged by Kickstarter and Crowdsource,” De Lellis says. He also wants the Puppet Slam Network to engage audiences, as the Network aims to connect slams, performers and audiences.  Right now they are doing a great job connecting slams with other slams and performers to slams, but it’s time to get the public involved.

And the Puppet Co. hopes YOU will get involved, too.

“This is something important to the D.C. community and to the puppetry arts community,” says Brooks. “It’s a powerful blend, whether as a performer, a volunteer, an audience member, or as a benefactor. If you like to try new things and want have new experiences, this is the event for you.”

“Your experience will be different than the person sitting next to you,” says D’Agostino.  And that’s exactly what we’re hoping for.”

Here is more info on the  Saturday, April 28th Playhouse Puppetry Slam! at The Puppet Co. Purchase tickets for the 7 PM show here and for 9 PM here.