A new sound is sliding its way into town as Creative Cauldron presents Women Of The Blues. An original blues review featuring those melancholy melodies from the turn of the twentieth century right on up to more modern inspired music this cabaret style evening is sure to entice your senses with four sensational singers bringing you the songs made famous by Billie Holiday, Ella Fitzgerald, Bessie Smith, Aretha Franklin, Bonnie Raitt, Janis Joplin, and more.

When you step into the performance space you feel like you’re taking a journey into a quaint little nightclub; a massive painted rendering of Billie Holiday sets the backdrop of the stage. Scene Designer Margie Jervis gives this club a cozy feel setting candlelit table tops and working with Lighting Designer Paul Speigelblatt to create an intimate moody atmosphere for these four talented voices to belt their souls to the audience. It is a night you are not likely to forget.

Director Matt Conner worked closely with the four performers to guide the creative process in designing this blues review. Conner chose to focus on female singers of the blues genre, which naturally led to many songs about men. The songs selection process was a collective effort guided by Conner to incorporate some of the most influential females of the genre into the review while paying them homage and letting the performers find their own connections to these songs, making that much more powerful when sung.

Four female performers coming from varying musical backgrounds come together on the stage to make this a truly enchanting night. With vivacious voices and powerful emotions they bring a new life to many of these classic blues songs. For the most part the show features solo numbers but there are a few group numbers when this quartet blasts powerful sounds to the audience. “Sugar In My Bowl” lets these ladies get catty with the audience in regards to men and sweetening the deal while still having fun and bringing a mind blowing sound that will rock the walls. 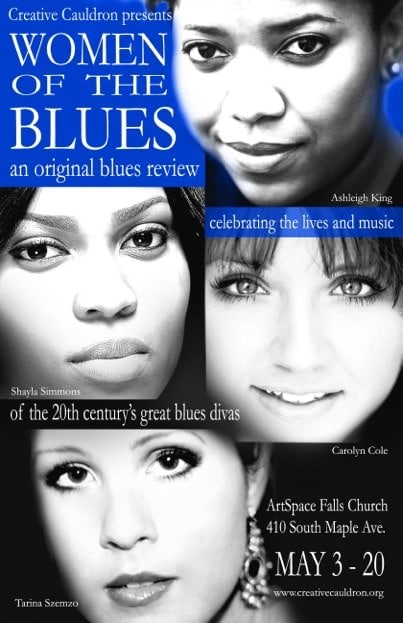 Tarina Szemzo, an Indie-Soul recording artist, brings a distinct and modern flavor to her music. There’s a hint of sass, a touch of class, a pinch of sexuality, and a dash of that moody blues soul that echoes forth in her singing. This is showcased best in her performance of “Wild Women Don’t Sing The Blues.” She sets an edgy sound in motion during her performance of “Hoochie Coochie Man” a song traditionally performed by a man. She whispers the verses with a vixen’s tongue sending shivers out across the audience and then belts the chorus to really shake things up. Her most grounded piece, however, is perhaps her most challenging one. It is always difficult to take a song that is made famous by someone and then bring something new to the performance of that song and Szemzo delivers in her rendition of Etta James’s “At Last.” Her mellow voice reflects the satisfaction every woman should feel when singing this song.

Carolyn Cole, a 2012 Helen Hayes Award winner (for her performance as Tracy Turnblad in Signature Theatre’s Hairspray), brings a spicy spirit to the stage in her performance. Cole presents passion in her rough screaming sound during “I Never Loved A Man.” She channels the wounded pride of a woman scorned, letting this emotion ring out in her voice and allowing it to be clearly written all over her face. Cole digs deep into the storm clouds of her soul during “Stormy Monday” with a deep emotional sound touching the blue devils of blues as she sings. The room is showered with her pains and feelings during this song as she lets her eyes pick up where her voice leaves off. She packs a powerful belt that earns her a standing ovation for her performance of Janis Joplin’s “Cry Baby.” She showcases the modern side of blues in a more contemporary artist and is singing to bring the house down with thunderous emotion.

Ashleigh King has a casual sound to her voice, a little gritty and raw to really exude those emotions well. King matches each song with intense facial expressions and really gets lost in the music, providing a stellar performance. There is a fierce anger sketched in her face during “I’d Rather Go Blind” with a soulful expressiveness to her voice as she tries to make the audience feel and understand her pain. King displays a natural ability to shift into a much more delicate petal during “Mean To Me” her face softening, her vocals quieting, while still bringing a wave of emotions to sweep the audience away in the melody and lyrics of the song. She has a fun and spunky attitude when singing songs like “My Castle’s Rockin” and “Women Be Wise” but she really sets the place ablaze with passion during “I’m The Only One.” King growls through this song with razors and flames making sure the audience hears each line with that fiery hell of a woman scorned.

Shayla Simmons exudes expressive inflections into her singing; each note and word sung carrying a hint of her feelings. Simmons frequently makes lasting eye contact with the audience really giving her music a personalized feel to it as if she’s singing the song just for you. She drives the tempo in “Down By The Riverside” really bringing that number to a toe-tapping pace and her infectious enthusiasm spreads like a raging fever across the audience. Simmons sings an acoustic number “Sun’s Gonna Shine” with guitarist Bruce Turner, and the two of them create a harmonious emotional moment together. Simmons is lost in her own little world of singing as Turner gets lost in his own little world of strumming and together the end result is a raw and perfect fusion of soul and hope. And Simmons brings tears to the audience with her mournful rendition of “Strange Fruit” a protest song designed to shed light on racism and the lynching of African Americans.

When these four ladies come together for the grand finale their fiery souls ignite the joint and they sing to bring the rafters down in a blazing rendition of “Proud Mary” that you’ve never heard before. You won’t want to miss this blues extravaganza, playing for a limited time only at Creative Cauldron.