What happens when a women who cannot conceive a child asks her sister to act as a surrogate – but instead of birthing one healthy human baby the sister gives birth to twenty-four fuzzy, adorable baby rabbits? The only way to find out is to attend The EMP Collective’s presentation of C Denby Swanson’s A Brief Narrative of an Extraordinary Birth of Rabbits.

Directed by Elissa Goetschius, this scripted production is the collective’s first production of a non-devised work this season. With a dark and zany feel to it, this strange piece explores the notions of birth in the human mindset – whether babies come from sexual intercourse or the stork, with a stork as a narrator and humans who embody animalistic qualities while grappling with personal struggles. Embark on this journey into one girl’s imagination as it crosses with her reality – and discover the true nature of humans and animals and how they aren’t really all that different.

Costume Designer Natalie Drutz brings several bizarre twists to this eccentric show. Drutz helps create a maddening sense of surrealism with her designs, bringing the dark recesses of Mare’s imagination to life in those that guide her story. The nurse looks rather like a strange harlequin clown; wearing varying degrees of black and white stripes, mixed with a corset and black and white polka dotted ruffled shirt. Her makeup reflects this monochromatic black and white scheme with pearls and paint.

The Stork appears almost like a carnival barker who had a terrible accident with a fourth of July parade float. He is covered in layers of ruffled lace, has a spangled hat to make Uncle Sam proud and is an overall hodgepodge of sequins and lacy bits making him look like a walking nest. Drutz hints at the animal qualities of the other actors; putting glittery pony silhouettes on Mare’s shirt, giving Kitty leopard print fabric for parts of her costume, and other subtle hints that really evoke the zany feeling this play imports to the audience.

Set Designers Dave Shuhy and Amanda Burnham further this feeling of absurd imagination meeting reality with his strange painted backdrops. The main hospital room appears to be made out of two-dimensional painted images, some that appear to belong in a hospital birthing room, some that do not. They are enhanced and look almost like a 3D funhouse, waiting to leap from their walls if only the audience had been given 3D glasses. This is a maddening effect that makes you uncertain at all times as to what exactly you are seeing. There is a makeshift puppet theatre created between two giant legs which adds to the ridiculousness of this production; because after all, who doesn’t want 18th Century Doctors popping in and out of their putang?

The bizarre hilarity does not end with the designs of this show. It is carried forth in the shenanigans of Mare (Carolyn Myers) and her whole strange story. About to give birth, Myers spends almost the entire show propped up on an oversized downward angled hospital bed that leads into a puppet theatre. Myer’s character has an over active imagination that allows things like 18th Century Doctors in puppet form to pop in and out of her vagina down at the puppet theatre and have conversations with one another. This proves to be a hilarious turn of events when Myers cannot stop imagining them before other real people enter the room. The puppeteers (Max Heaton, Maya Jackson, and Alex Vaughan) make a frantic getaway trying to blend into the scenery as full bodied humans with puppets attached to their hands.

Heaton, Jackson, and Vaughan use their slapstick comic styling a fair bit throughout the production, beating each other up verbally and physically when they are the puppets. This trio provides great comic relief to this odd show and will keep you in stitches with their antics.

Myers portrays a bubbly and aloof girl with the body of an adult female. But her mind is very childlike –  innocent and naïve making her imagination that much more colorful. There is a moment of sheer chaos that bursts forth on the stage when Myers imagination collides with reality. The whole moment is unsettling and yet captivating; you can’t look away despite being confused and frightened.

Playing opposite Myers is Mary-Alice Farina as her sister Kitty. Farina is rather bitchy and cold; from the moment she stomps onto the stage we feel the huge resentful chip on her shoulder as it radiates hatred and disdain for her sister. Myers and Farina are the perfect foil for one another’s characters. Myers spends the show with her head in the clouds bubbling on about her various rabbit babies while Farina is grounded and furious; stomping and demanding, each word pierced with a passionate poison. Farina is also the only character who seems to see the problem with Mare birthing rabbits instead of babies and she lives this exasperation of being the only potential sane character with a great zest; channeling her emotions through her voice and her staunch physical presence.

Stuck in the middle of these two opposite women is Kitty’s husband, Joe (Ken Jordan) who doesn’t seem to mind that he’s having rabbits for children. With a balance of Kitty’s demands and Mare’s dreamy mindset he is the perfect medium between these two crazy characters and provides a new perspective to the story. Until he reveals all sorts of things that are most unexpected.

And it wouldn’t be a narrative without the narrator and in this case the narrator comes in the form of a Stork (Marc Rehr). Taking moments to explain everything from mythology to common human misconceptions about everything from births and storks to rabbits and sex, Rehr is the penetrable membrane between the audience and the show itself. He relates to the audience what the characters cannot and reminds the characters of things otherwise beyond their comprehension. Rehr plays an evolving character who is as much a narrator as part of the story – as he grows and realizes that everything he has been explaining to the audience and to the characters also in some small way applies to him. With a great crescendo of sorrow and comprehension his performance comes to a head late in the show and is not to be missed. Keep your eye out for the nurse (Karen O’Connell) as well. Every entrance to a scene involves some impossible acrobatic feat as if she were presenting a circus to each new scene. 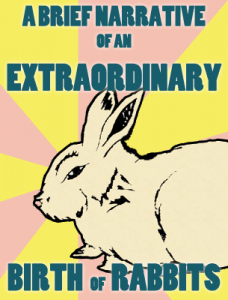 So for the profound moments, or for the comedy; be you interested in puppets in the lady bits, or the rabbits that are there also, this particular production will keep you engaged even if you do leave the theatre a little confused and asking yourself what it was you really just saw. The EMP Collective’s birthing of this rabbit narrative is one for the baby book.

A Brief Narrative of an Extraordinary Birth of Rabbits plays through May 19, 2012 at the EMP Collective Space – 306 West Redwood Street, in Baltimore, MD. For tickets, order them online, or purchase them at the door prior to the event. Seating is limited so purchasing tickets online is recommended. Performances are Thursday through Saturday at 8:00pm with a special industry night performance on Monday May 14th.