According to an unproven theory, all of us mere mortals are connected to anyone else on the planet through a chain of acquaintances separated by no more than five other people; six degrees of separation. And new research has shown that two people are perhaps even closer, 4.74 degrees; Impossible? Maybe not. The recent cast of Six Degrees of Separation gives us one more opportunity to dissect the theory.

Six Degrees tells the story of how a wealthy, white New York couple gets conned by a young, Black man, Paul (Chaz D. Pando). As the play progresses, we learn that Paul is a serial con artist, possibly a psychopath with hints of loneliness and a fierce need to feel connected to any and everyone around him. We in the audience assume that Paul’s first victims are Ouisa (Lisa Anne Bailey) and Flan (Darren Marquardt). But Paul is sort of an expert at this scheming and there are many more who are a part of the equation. This play was made into a film of the same name starring Will Smith, Stockard Channing, and Donald Sutherland in the lead roles. Smith received accolades for his turn as the troubled Paul.

Director Rob Batarla decided to present the play in the round – the audience sees the various performances from different angles, and the result is a stunning visual. Batarla, who also designed the set, creates a subtle, but effective layout. Two zebra print chairs are separated by a petite end table, and a single black couch with equally zebra-like pillows sits across from the chairs. A neat bar falls behind the couch, and a sun colored chandelier pulls it all together. Lighting by Ryan Johnston is efficient. One minute the cast is shrouded in shadows and the next they are standing under bright, vivid lights.

Though the production team is stellar, the same cannot be said for much of the cast. The opening scenes are low in energy, bland even. Even as Ouisa and Flan were motioning, speaking to the audience, it felt as if they were talking at me, not to me. Ouisa and Flan’s dilemma didn’t feel like, well, a dilemma. Several scenes require the actors to give enough only through a brief glance, turn of the head, or pitch changes when delivering the lines. They strutted around the stage uncomfortably and stiff, and it took these two quite a while to find their groove. Bailey’s Ouisa cranks out near perfect shrieks and tears, but only near the end of the play. Marquardt’s Flan sprinkles in bits and pieces of humor, but again, this occurs towards the final scenes. 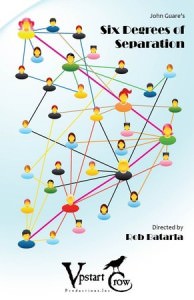 A shining performance comes from Kevin Walker as the Hustler. The entire liveliness of the play shifts when he stomps into the circle wearing only a sliver of underwear. The life of the play continues to rise as Kitty (a radiant Carole Preston) and Larkin (a hilarious Eric Trumbull) describe their encounter with Paul. The teen to adult aged children of those duped by Paul (Kimberlee Wolfson, Ben Jablonowski, Joshua Dickenson and Clemente Santiago, III) are a part of a satisfying ensemble. Plenty of comic relief and solid acting from these performers. One great scene is after everyone involved in Paul’s game has found out about each other. The cast stomps around and around the furniture, nearly chasing one another in an attempt to get answers, any answers to explain why they have allowed someone to disrupt their lives so much. The genius is not even in Paul’s ability to con people, it is their willingness to let anyone who has some kind of connection to someone they know to become a part of such an intimate part of their daily living.

Six Degrees of Separation is delightful, pure material, heavy on dialogue and monologues. I’m confident that the Vpstart Crow Productions will become even better as the run continues as the performers embrace their characters, and delve into their lives to present what can come from such a brilliant concept – six degrees of separation.