Riverside Center Dinner Theater presents Anything Goes, an ocean-liner adventure with unforgettable music and lyrics by the renowned Mr. Cole Porter and upbeat song-and-dance numbers. The production is directed by Justin Amellio.

Anything Goes has a plot acting as a mere excuse for the musical showcase – a splintery post that holds up a shiny trophy – and at times it is difficult to invest in characters that more closely resemble cartoon characters than actual people.

Set in the 1930s on the S.S. American, a gaggle of boisterous characters vie for their affections, whether it be love, power, or fame. Scenic Designer David P. Stock transforms the stage into a tiered luxery ship, with a set of steps on both sides, and roped railings. The stage revolves to show cabin interiors, both simple and lavish. Lighting Designers Nicky Mahon and Justin Looney pair each song with a color, either bright for the punchy numbers or subdued for the slow ones. Gayle Law does a fine job of dressing the characters in proper 1930’s attire, but she outdoes herself with the costumes of one specific character: Reno Sweeny, a famous showgirl whose simplest outfits wouldn’t be out of place at an evening ball. Beglittered from head to toe, Reno shines – literally – and you simply cannot take your eyes off of her (that is, until the sequins threaten to blind you).

The plot centers around a love-struck young man named Billy Crocker (Mason Reich) who is bound and determined to charm his beloved away from her obliged engagement. However, certain circumstances make it so that he must not be recognized, so he is constantly switching disguises throughout the show (including a sailor, chef, woman, and others) so as not to be identified. Brittany Taylor does a fine job as Hope Harcourt, and makes her stunning voice heard in the duet, It’s Delovely. In love with the goofy Billy but engaged to an English gentleman (a hilarious Robert Beard as the ultra-refined Sir Evelyn Oakleigh), Hope has a decision to make, and the length of a boat trip to decide. Alex Balian is great as Moonface Martin, Public Enemy # 13 (who is as vicious as a teddy bear), and Kimberly F. Knight steals every scene she is in as Bonnie, Moonfaces’ saucy traveling companion. Knight takes a triumphant lead in “Buddie, Beware,” which proves to be one of the most entertaining numbers in a song list comprised of nothing but hits!

But no character sparks quite as fiercely as Reno Sweeny, played by the lovely Kathy Halenda. Effervescent and sharp, Sweeny is the ship’s most well known passenger – and she knows it. The famous nightclub singer manages to strut around like she owns the place without giving off an ounce of snobbery, and charms her way into everyone’s hearts, particularly someone you would hardly expect! “Friendship, a song sung” with Moonface and Billy, is particularly catchy, and her solo performance of “I Get A Kick Out of You” is surprisingly sweet. The songs are coupled with knockout choreography by Penny Ayn Maas, including classic styles such as tap, swing, fox trot, and the jitterbug.

Riverside Center Dinner Theater’s production of Anything Goes has a great cast that delivers wonderful songs and dancing that are simply infectious, and well worth the ticket price.You’ll be  humming Cole Porter’s memorable score all the way home.

Running time is approximately 150 minutes, including one 15-minute intermission. 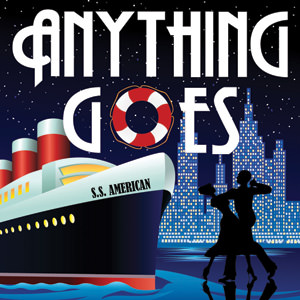 Anything Goes runs through July 22, 2012 at Riverside Center Dinner Theater – 95 Riverside Parkway, in Fredericksburg, VA. Purchase tickets by calling (540) 370-4300. View the menu for this production here.