Last night, with their opening performance of Hair, Act Two @ Levine successfully completed a task I thought was impossible: changed my opinion of the 1969 hit musical. With their strong ensemble, talented vocalists, and beautiful set, the production blew me away.

Directed by Kevin Kuchar and musically directed by Billie Whittaker, Hair follows the story of a hippie tribe searching for purpose and identity in the 1960s during the Vietnam War. As the tribe attempts to deal with the war, they also explore drugs and their sexualities. The cast of 18 high school students successfully conveyed these controversial ideas. I was happy to find that they did not fall into the trap that I witness at most high school productions dealing with drugs. Usually students who have little experience with these substances are unsure of how to portray them, and in the end look immature. However, considering their age, I felt this cast handled the issue professionally, which in the end, contributed to the show’s success. 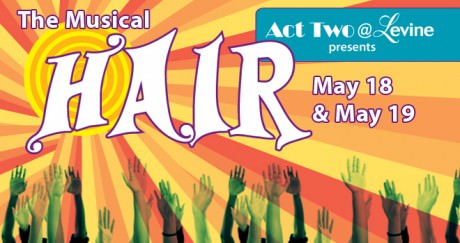 Kuchar took advantage of the black box theater, which resulted in brilliant set design. The tight space drew the audience into the tribe campsite complete with brightly colored tents and rugs. The tie-die shirts strung up on both sidewalls added to the hippie feel, but what truly caught my interest was the ceiling. There were a series of screens that throughout the production showed war footage and videos of protests taking place during the Vietnam War period. This choice on Kuchar’s part was inspiring.

The staging was just as impressive as the set. Kuchar made good use of the tight space and placed the cast members in the audience throughout certain points of the show. In most cases, this was a successful choice. For example, at the end of Act One, I liked how the cast members went into the audience with beads and war protest flyers. It helped draw the audience into the action and keep them interested. However, in other cases, this choice led to some problems. The sound in the black box theater was not great, especially because the actors did not have microphones. When the ensemble members were singing so close to me, I found it difficult to hear some of the soloists on the floor.

All of the principle characters were well cast, but I felt a few in particular deserved special mentions. Kayla Dixon (Dionne), provided the show with a strong start as the “Aquarius” soloist. Her voice rang throughout the theater and set a positive tone for the rest of the production. Lucy Freshour (Crissy) charmed the audience with her beautifully sweet rendition of “Frank Mills.” Jessie Kleuter (Sheila) wowed me with her strong acting and vocal skills. Her rendition of “Easy to Be Hard” was heartbreaking, and I found it easy to connect with her character. Eitan Mazia (Woof) was simply fantastic. His humorous stage presence drew me to him at countless points throughout the production, whether he was singing a solo as Woof, or playing a monk in one of the drug scenes.

Sean Watkinson’s (Claude) solo “Where Do I Go,”was strong, but the simplicity of it also added to the beauty. I was blown away by his ability to portray his intense fear of going to war. His acting was particularly impressive in “Three-Five-Zero-Zero,” when he was shaking on a table, and I was truly able to feel for his character.

Because Hair is such an ensemble focused show, I was happy to see that the cast rose to the challenge with high energy and talent. Everyone seemed to play their part in making the production a success, however, there were a few ensemble members in particular who caught my attention. Rachel Schindler blew me away with her “Black Boys” solo. Her dancing was spot-on and her voice was unbelievably impressive. Korrinn Walfall had numerous solos throughout the production, but her rendition of “White Boys” was particularly striking. Finally, Ivanna Barrientos’s high notes in “Be-in ‘Hare Krishna” were incredible and I was constantly drawn to her great acting ability and stage presence throughout the production.

Kuchar made an interesting choice for a high school production. Hair involves many topics that have the potential to create difficulties for a young cast due to their lack of experience with them, such as drugs. However, the performers rose to the occasion. Even the partial nudity, for which Hair is known, did not seem to faze the actors. They tackled each idea with high class and talent, which in the end, created a truly enjoyable production. 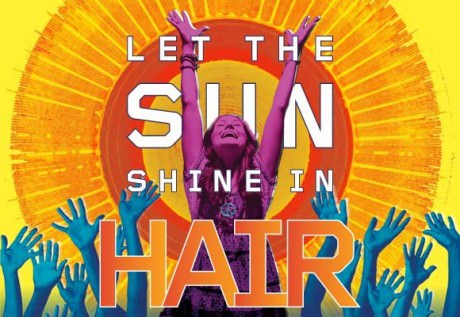 Hair will end its short run tonight, Saturday May 19th,  at Act Two @ Levine – at The Music Center at Strathmore – 5301 Tuckerman Lane in Bethesda, MD. The show is sold out, but a limited number of tickets will be available at the door. For more information, call (301) 897-5100.