The bright blue walls and bold geometric shapes of Mario Marcel’s set for Las Quiero A Las Dos give it a heightened, almost cartoonish feel, which proves fitting for Teatro de la Luna’s hundred-minute romantic farce. Marcel’s staging of Ricardo Talesnik’s award-winning Argentinian play feels like a cross between a telenovella and an episode of I Love Lucy, but the slapstick humor ultimately doesn’t justify the trite and conventional story.

The play begins with Miguel (Peter Pereyra) packing for a business trip with the help of his wife, Julia (Yovinca Arredondo Justiniano). When she overhears him making a very un-businesslike phone call, she locks the door and hides his keys, preventing him from leaving the house and, therefore, presumably, their marriage. Miguel’s efforts to escape, and Julia’s to keep him home, involve disconnected phones, a politically incorrect seduction attempt, and numerous animal impersonations, but they grow repetitive long before Isabel, the mistress (Karen Morales-Chacana) arrives to move the plot along.

Like the costumes (by Rosita Becker and Nucky Walder), the actors are energetic and attractive but don’t do much to tell the story. They throw themselves with vigor and agility into the physical absurdities of the staging, and their timing has the crisp precision farce requires. Morales-Chacana has a throaty sensuality that gives authority to her role as the eternal Other Woman, and in the play’s one serious scene, Justiniano is poignant in her steadfast refusal to hear the truth about her husband’s affair. As the crucial central character of Miguel, however, Pereyra is more hapless than dashing, and I wondered more than once why two such clearly intelligent, capable young women remained so resolutely attached to him.

The play is performed in Spanish, with English surtitles, and the language barrier is perhaps more of a hindrance in a comedy than it would have been in a serious play. The surtitles cannot always keep up with the fast-paced spoken dialogue, which spoils the timing of some of the jokes. At times Quiero veers encouragingly close to satire, most notably in an early moment when Julia tries to hide Miguel’s keys in her cleavage and they fall straight through her negligee and onto the floor, forcing her to stash them in a potted plant instead. It’s a nice piece of direction, even if it arises from a questionable choice of costuming. (In a play centered around a wife-mistress conflict, why have the wife prancing around in lingerie right from the start? It undermines her later transformation). But although Talesnik sets up some interesting dynamics, the script continually favors jokes over character development, and both Marcel and his cast embrace the comedy at the expense of exploring what a real-life modern marriage — populated by three human beings rather than three caricatures — might look like.

Running time: One hour forty minutes with no intermission. 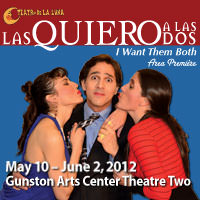