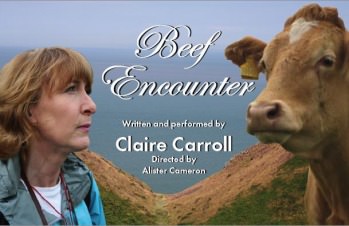 “It was originally going to be a book about the pitfalls of walking holidays:  a sort of ‘What you need to know but they will never tell you.’ Having heard me read an extract aloud, Steve suggested I turn it into a one woman show. This is the best thing to come out of that walking holiday!”

Beef Encounter is the story of reluctant rambler and renowned food critic, Belinda Donovan, who gets separated from her group on a walking holiday. Confronted by a herd of cows her fast talking takes her from fear and loathing to quite another level. Belinda unexpectedly opens up to her ruminant audience, about the nightmare of walking holidays, her life, love and insecurities.  In just 50 funny and poignant minutes in the company of cows, Belinda learns more about herself than she has in many years.

The Capital Fringe will be the North American premiere of this British comedy.