Studio 3 Theatre for Young Adults presents Rapunzel, the classic childhood favorite that has re-gained a booming popularity in the recent years. Director Caren Hearne stays true to the version that most children know and love, but with a couple of twists, including a two-headed monster and a witch that has the audience under her spell!

The set is an enchanting one, taken up mostly by the “stone” walls of a tower that has ivy-covered flowers crawling across it. In a clever idea, footholds slightly jut out from the tower, and when Rapunzel cascades her hair down over them, the actors really look like they are climbing her mane as they scale the wall. Nicely painted forestry and scattered boulders take up the rest of the set, and dappled lighting designed by Joseph Wallen gives the impression of sunlight streaming in through trees. Sound Designer Alex Aucion uses effects such as chimes, thunder, and silly jingles throughout the production. Costumes by Kristen Jepperson come straight out of a fairytale book, with medieval designs for Rapunzel and The Prince, a metallic green and gold monster costume, and my favorite, The Witch, who twirls around in a velvety black and red cape, an artfully distressed black dress, and bold, glittery make-up. 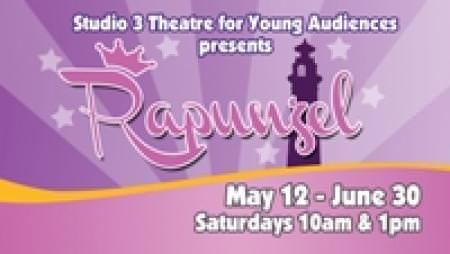 As they waited for the show to begin, the excited group of children walked around and chatted with each other, both them and their parents making new friends (most of them were complimenting each others princess costumes and accessories, which speckled the crowd in bright pops of pink and tulle). After a quick discussion and demonstration on proper audience manners, the settled children are ready for the show.

The Witch takes the stage, played by a wonderful Kindra Cook, who charms the audience immediately. Tending to her vegetable garden, she talks to the children as if they are newfound friends. She explains that witches cannot bear children, and so the only happiness she finds in her life is in the vegetables she grows. When she leaves, The Baker and his Wife (Jesse Baskin and Amanda Spellman), her neighbors, show up in a distressed situation. The very-pregnant wife will not eat, and succumbs to fainting spells (humorously blocked and delivered), and her only relief can be found in the witch’s vegetable patch. Terrified of the witch but determined to help his wife, the Baker tiptoes around the garden, filling his basket. The pair are a bit cartoonish and use highly-exaggerated movements, but as they are paired with playful tunes and work off each-other’s silliness, the exaggeration works in their favor. When the charismatic witch returns and asks who stole her vegetables, the kids take no hesitation in shouting out the culprit’s name, even though he is silently begging them not to from behind her. In one of the funniest moments of the play, the witch turns the baker into a fish, and as he flops around the ground gasping for air, the children’s laughter nearly bursts my eardrums. In exchange for her husband being turned back into a man, the wife sadly promises to hand over her child.

Eighteen years later in the story, the audience seems to turn on the witch once she reveals that, in order to keep her daughter (Rapunzel, played by Ashley San) perfect and happy, she has locked her up in a tower, away from any influence of the outside world. And to guard her, she has hired a two-headed monster to prowl around the base of the tower. This monster, riotously played by Anna Jackson and Chris Galindo, proves to be cowardly, and squeals in terror when introduced to the child-filled audience. In fact, they seem inept at scaring away anything, including The Prince (Eben Kuhns) and his Squire (played at my performance by understudy Jason Hammock), who have been lured there by Rapunzel’s singing voice.

You know what happens next. Romance (though the Prince has to explain many things to an out-of-touch Rapunzel, from trivial subjects like festivals to deeper issues like love), escape, and revenge for the furious witch. The new couple is cast apart through unique spells, with little hope of finding each other. Can love conquer magic?

Everything about this production was solid and well executed, and the acting was great. Special recognition goes to Kindra Cook as the enthralling witch, and Anna Jackson and Chris Galindo, who received the majority of laughs for their hilarious pairing as a cowardly monster. After the show, the actors lined up along the theater to give autographs and take pictures. Rapunzel proved to be a great afternoon of fun!

It has regrettably come to light that the decision has been made to shut down Studio 3 Theatre for Young Audiences after only 6 months of existence, and Rapunzel will be their last show. As there are not many outlets for children’s theatre in the Lorton area, this decision is an extremely unfortunate and sad one, and quite a waste of exceptional talent. I wish the best of luck to all of those affected.