In 1978, 100,000 women marched along Constitution Avenue demanding more time to ratify the Equal Rights Amendment. Were you there? I, Ellouise Schoettler, was there.

In this one-woman show, I transport you into the 1970s women’s movement through the eyes of ordinary women compelled to do extraordinary things with no roadmap, training or budget -everyone working together to make a difference fueled only by growing bonds of sisterhood and a yearning for change.

Woven through the larger history of the times is my personal journey as a nursing school dropout and 1950s housewife who morphed into both a women’s artist lobbyist and a national ERA Activist. It’s a journey that jumpstarts when I went back to college in 1968 as a young mother, taking the school’s first-ever women’s studies class, and beginning to meet interesting people with new ideas.

Before long, I was compelled to raise my hand, too – to ask questions, to volunteer, to suggest untried solutions, to lobby Congress at a time when you could just walk the halls. I gained experience which culminated in a paid job – as National ERA Campaign Director for The League of Women Voters – and a creative idea to bring Hollywood, Madison Avenue Ad Women and Fortune 500 CEOs into the ERA Campaign under the aegis of my ‘baby’ – the National Business Council for ERA.

The Real Story of the 1970’s Women’s Movement

If it seems implausible, just know: The Pushing Boundaries program is a true story. Big names made the headlines and the history books, but the 1970’s women’s movement was at its heart a grassroots effort. Ask women in your life what they were doing at the time; you may be surprised. 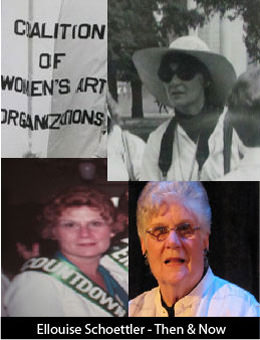 Today, we’d call it “crowdsourcing.” Then, I and others were just ordinary women working together to create a stronger, collective voice. Volunteer opportunities were everywhere. Sometimes geography was the critical qualifier, especially when I lobbied Congress for gender-blind art jurying. I was in a meeting of well-known women artists in New York City when someone suggested walking the halls of Congress and talking to politicians directly. ‘You live there don’t you, Ellouise,’ someone said, ‘Couldn’t you do that for us?’”

Luckily, there were experienced mentors ready and willing to help.

When you think about Pushing Boundaries, think Forrest Gump meets I Love Lucy, played out in Washington, New York City, and along the ERA Ratification trail.

See it and you’ll leave smarter and wanting to know more about what was happening in the lives and minds of the women in your life during the 1970s – and with enough information to ask the right questions to find out.

I turn 76 on opening night. One thing I learned in the 1970’s is that you don’t wait for someone to give a place for your voice. When you have something important to share, you stand up and say it before it’s too late.

The good news is that, as a long time professional storyteller, I am confident that I will entertain you while I’m doing it. 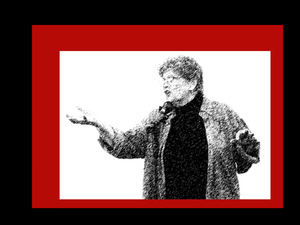 Pushing Boundaries: An ERA Memoir is written and performed by Ellouise Schoettler, a nationally known storyteller who, from 1972 to 1982, held leadership positions in a number of women artist and political organizations. Learn more about 1970s women’s history here.

For more information about Pushing Boundaries, including reviews, go to our website: