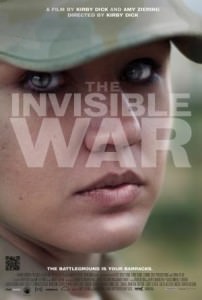 The U.S. military’s stance on sexual assault prevention is a joke. The shot of a poster that reads, “Don’t risk it. Ask her when she’s sober.” flashes across the screen. I chuckle then nearly choke on my laughter as the former director of the Sexual Assault and Prevention and Response Office (SAPRO) Dr. Kaye Whitley confirms that this kind of propaganda will actually prevent sexual assault. I was in awe, outraged, livid. These are the emotions Kirby Dick’s latest film, The Invisible War will most likely elicit from viewers as it exposes sexual abuse in the military and the Department of Defense’s lax position on prosecuting the accused.

The Invisible War is a public service film, chronicling the lives of women who were sexually assaulted in the military and exposes a generations-long cover-up of military sex crimes. Sexual assault in the military is an epidemic, one that is mostly under-reported by the media unless the story is sensational, i.e. Tailhook, 1991 or Aberdeen Proving Ground, 1996. Winner of the 2012 Sundance Film Festival Audience Award: U.S. Documentary and of the Silver Heart Award at the Dallas International Film Festival, this film is a compelling call to action.

As the movie reveals, women and men who are raped while serving in the armed forces are virtually dismissed by their respective branches after they’ve reported instances of sexual assault. Consider these facts: 33% of those assaulted don’t file a report because the rapist is a friend of the commanding officer. There are 25% who don’t file because the rapist is their commanding officer. An astounding 15% of Navy recruits attempt rape or some form of sexual assault before they enter the military. Roughly 1% or 20,000 men who serve in the military are raped. More than 500,000 men and women have been sexually assaulted in the U.S. military. These numbers become even more staggering if you consider those who choose not to report and remain silent.

What is even more obscene is the fact that there is no separate justice system or council in place to handle rape cases in military branches. Those assaulted are forced to report the incident to their superior officers. In the military, the chain of command must be adhered to and respected. The subjects, Kori Cioca, Jessica Hinves, Ariana Klay, Trina McDonald, Elle Helmer, Hannah Sewell, Myla Haider and Paula Coughlin all have searing accounts of how they were sexually assaulted while serving their country. Cioca’s story is particularly heartbreaking as her assailant broke her jaw during the attack, and she spends countless hours on the phone with VA representatives who tell her that her claim is still pending; after four years. Cioca has been on a soft diet for five years. She takes several medications and has to avoid cold weather or she will suffer searing pain in her jaw.

An especially touching scene in the film is when Sewell’s father, Sgt. Maj. Jerry Sewell, who is active in the Army, recounts when his daughter calls to tell him she is no longer a virgin. The tears fall freely as Sgt. Maj. Sewell recalls the event that changed his daughter’s life, for he had promised her that she would be taken care of while serving in the Navy. Coughlin, who attended the notorious Tailhook conference, had superiors tell her after the assault, “Well, that’s what you get for walking down a hallway full of drunk sailors.” McDonald would call home to her father and beg him to get her out of Alaska, where she was repeatedly drugged and raped. When her father asked for specifics, she couldn’t tell him because the phones were tapped and she feared for her life. Klay, who was assigned to the distinguished Marine Barracks Washington, was told she welcomed the attack because she wore make-up and regulation uniform skirts.

What the film successfully conveys is that the aftermath is even more horrific than the actual incident. Many of the survivors suffer from depression, post-traumatic stress syndrome, have attempted suicide, struggle to hold jobs and keep their marriages together. Essentially, the military believe that these survivors are liars, are filing false reports and should go home, suck it up and deal with it.

Rape, even in the civilian world, is still a taboo subject. Many women who report the incidents are not deemed credible by police, are constantly asked what they did to solicit such an act, or if they know the accused. There is, however, a judicial system to administer a prison sentence. Imagine the pain those who choose to report must feel when their superior officers opt to do nothing. They recount how and when they were attacked as their assailants walk free and even climb the ranks in their respective branches of military.

Dick, whose films are known to spark dialogue (This Film is Not Yet Rated, Twist of Faith, Outrage) has made a force of a documentary here as it sheds a glaring, unflattering light on how the military chooses to manage reports of sexual assault. It’s the kind of film that grabs you, shakes you to attention while punching you in the gut; several times over. It is hauntingly powerful, chilling, dynamic, commanding and needs to be seen, discussed and most importantly something must be done. As the credits rolled, I felt enraged, anguish and a bit powerless, but also know if more people were to see this film, the way the U.S. military deals with such an unforgettable occurrence as rape among their servicemen and women will change.

This film is not rated.

If, after watching this film or even reading this review, you are moved to take action, please visit here.