This year’s Ruby Griffith Award Ceremony, hosted by The British Players, will be held on Sunday, July 15 from 2 to 4 p.m. at the Bretton Woods Recreation Center, 15700 River Road, in Germantown, MD.. The awards honor the best performances in community theatre in Washington D.C., Maryland and Virginia. 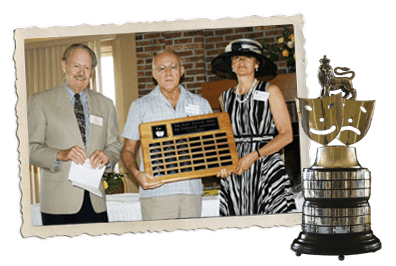 The All Round Production Excellence award is a trophy made of sterling silver and depicts the masks of comedy and tragedy below the British Lion. The trophy was crafted by Garrards of London from an original design provided by an early member of the British Players. The two Outstanding Achievement Awards are plaques with the representation of the Lion and masks from the All-Round Excellency trophy. The two Outstanding Achievement Awards will also include certificates for three runners-up.

Last year’s All-Round winner was the Kensington Arts Theatre’s production of Chicago.  Winner for achievement in a musical was the Damascus Theatre Company for She Loves Me.  The non-musical winner was the Providence Players of Fairfax for The Shadow Box. First and second runner-up awards were presented in all three categories. The additional third runner-up award has been added this year.

The British Players is a non-profit group of British and American members dedicated to bringing high-quality traditional British theatre to the Washington.  The group performed regularly for 40 years at the British Embassy in Washington before moving to Kensington, MD, in 2005.

The British Players perform three to four productions each season, starting in the fall and ending in late spring with the annual Old Time Music Hall. All productions are by British playwrights or are British in content and include pantomimes, Christmas shows, mysteries, farces, and traditional music halls.   Additionally, the company performs one-night shows at nursing homes, clubs, Embassy departments, and local organizations, both to provide entertainment and to raise money for both British and American charities.