You may have read in an earlier JUDYISM that my only real fear is being able to memorize lines, which has been the one and only difficult thing for me to overcome in this profession. Well, I won’t ever have that fear again and this is why.

A couple of weeks ago, a dear friend of mine and director of a currently showing Off Broadway play came to me and asked if I’d be willing to step in for the lead actress who has a conflict the following week.

Did you hear what I just said?

By the way, did I tell you that it was a NINETY page script? That’s right and the character of the mom that I was learning was ON throughout the entire script … she never leaves the stage.

Well, this by itself would have been an enormous task for anyone, but perhaps due to the stress of the undertaking, perhaps due to an act of “I don’t know what,” I woke up on the second day of learning the script so sick that I couldn’t get out of bed without feeling faint, I was very, very weak to say the least, but the good thing was I did have both a hard copy script which I began to read and read and read and an audio recording on my iPhone (that I made because as is my habit, I first recorded my part and then created a separate recording using only the other characters and leaving my part out. But what I found very helpful was, when I was getting overwhelmed (who could believe that?) was to put on Netflix and watch a movie, one that would take me completely away from myself. 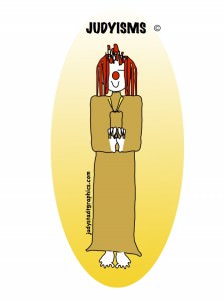 The good thing about having such a distraction for the mind is very beneficial and took the pressure off me for awhile. I was very much aware of the fact that I had to be calm throughout and not allow myself to become panicked over my decision … now this is Wednesday and the next Wednesday I am scheduled to do two performances before a rather large audience … a matinee and an evening and I must remain CALM AT ALL COSTS!!! So, for this unusual circumstances only, I allowed myself to take a piece of a Valium because the hardest time for me was when I awoke and realized what an undertaking I took on … the anxiety for a few days was almost unbearable and the Valium allowed me to remain calm enough to concentrate on the task at hand.

Well, I think I’m going to stop now and send you another Judyism next time to let you know what happened. You will love to hear about it because it really gives out an important message, so until then…

LINKS
Listen to The Lunch and Judy Show.