Last night, Signature Theatre opened its annual ‘Sizzlin’ Summer Cabaret’ series with a smashing performance by Matthew and Kirsten Scott. This is the first cabaret out of the batting cage of 16 different performers totaling 19 cabarets in this annual Signature summer extravaganza, and they hit a home run!

For Washington DC audiences, the individual accomplishments of this couple are indeed noteworthy. Kirsten performed in Follies at the Kennedy Center and went on to play the same role on Broadway. Matthew was in Signature’s production of Side By Side By Sondheim. In 2010, he played in a Signature original production First You Dream: The Music of Kander and Ebb, which was given a new production last month at The Kennedy Center. It’s not often that these two exceptional performers have the chance to perform together on the same stage. Sharing their lives in a cabaret with the evening’s patrons in the intimacy of the ARK theatre – provided a unique experience.

Although Kirsten and Matthew have been together since meeting at Carnegie Mellon University eight years ago, they decided to tie the knot a little over three years ago. You may ask – why is this vital information?  What these two performers successfully accomplished tonight was to celebrate their anniversary belatedly with the audience by sharing the journey from their initial meeting in 2004 till today, singing duets and solos of  over a dozen songs in both parody and sincerity. Other than the introduction by Associate Artistic Director, Matthew Gardiner, which established the parameters of the evening’s performance, there was no dialogue or banter with the audience as to why a particular selection was offered.

During the performance the audience experienced both the known and unknown. Some of the composers whose work we heard included Stephen Sondheim, John Kander and Fred Ebb, Neil Sedaka, Adam Sandler, Randy Newman, and selections from such shows and movies as The Last Five Years, Little by Little, Big, On a Clear Day You Can See Forever, West Side Story, and George Gershwin’s A Damsel in Distress.

Highlights of the show included “Popcorn” from Little by Little where a couple shares a bag of popcorn while sitting on high chairs, singing their thoughts to the audience as to how far each might proceed romantically on the first date. The audience was in hysterics as they listened. In a medley from Jason Robert Brown’s The Last Five Years they sang “Moving Too Fast” and “Climbing Uphill” about another couple contemplating their relationship’s challenges in soaring exchanges – which exhibited their vocal ranges.

Gabriel Mangiante provided accompaniment on the Piano and was a huge asset to the cabaret’s success. His overture, interludes, and expertise complemented the performers well. 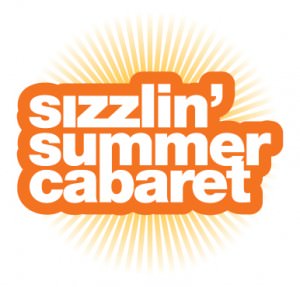 Sizzlin’ Summer Cabaret will be on-going thru July 28th. Tickets are $25.00 for each show or you might consider a more economical approach by buying an all-access pass for $125. With so many varying options to consider, a Signature cabaret might be a cool alternative and incentive as a change in temperature to DC’s scorching summer.

Running Time: Approximately one hour, with no intermission. This was a one-time performance.