The latest rock-lit-fusion by Dizzy Miss Lizzie’s Roadside Revue, The Brontes, is a hell of a lot of fun. It’s easy to understand how the troupe earned the buzz of being one of the best fringe tickets in town. Their work is polished and expertly executed, while also imaginatively experimental, and perfect for The Capital Fringe.

The Brontes (written and composed by Debra Buonaccorsi and Steve McWilliams; directed by Buonaccorsi and Rick Hammerly) dances deftly between realms of the cheesy, the creepy, the trippy and the heady. A group of spirited “Carnies” tell the story, led by the multi-talented McWilliams as a manic “Barker” and a seductive, sultry voiced Gillian Shelly as “The Gypsy.” A ghastly pallor falls over the carnival atmosphere with the arrival the Bronte sisters, re-imagined here as three darkly-clad hotties (Dani Stoller as Emily Bronte, Laura Keena as Anne Bronte, and Buonaccorsi as Charlotte Bronte), who learn over the course of the evening to turn their “Victorian repression into rock-and-roll expression.” There’s also their lesser-known, but equally angsty brother Branwell Bronte (rocking Matt Schleigh, in the stand-out performance of the show). Bassist Jason Wilson steals the show multiple times as a grim reaper-like Dealer. Stoller is a magnetic talent, particularly in her song “Heathcliff.” Likewise, Buonaccorsi delivers a stunning performance of “Hunger Rebellion & Rage” in the later moments of the play, making us wish she had written a more central role for herself. Vocal performances are solid all around, and sound designer Dan Martin provides the best sound I have ever heard in the Baldacchino Gypsy Tent venue. 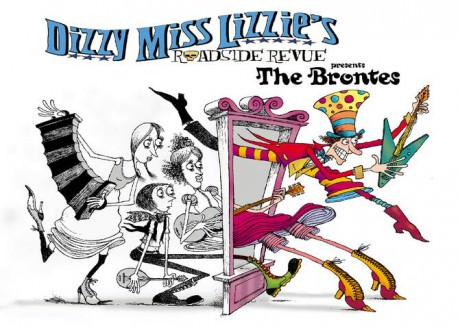 The pulsing songs by Buonaccorsi and McWilliams are catchy and well-crafted, occasionally reminiscent of the later works of The Beatles. They will appeal to rock lovers, but the volume is set to a non-ear-bleed level that more conservative theatre-goers will tolerate. This is a show that anyone who was ever forced to read a Bronte novel in school will appreciate. If you happen to be a lit-nerd like this reviewer, however (test: will you laugh when the Carnies consult “Heathcliff notes?”), you’re going to love this psychedelic trip down Bronte lane. I, for one, hope to see DMLRR tackle Lewis Carroll next year.

For more information about the show and to purchase tickets, read our Fringe Preview.