The first thing to know about Barter is that it has very little to do with bartering. In 75 fascinating, touching, and amusing minutes, the characters spent roughly 5 minutes bartering. Nor does the futuristic setting (10 years from now in New York) really matter to the heart of the story. In this future, everything is the same…just a little bit more and a little bit worse. 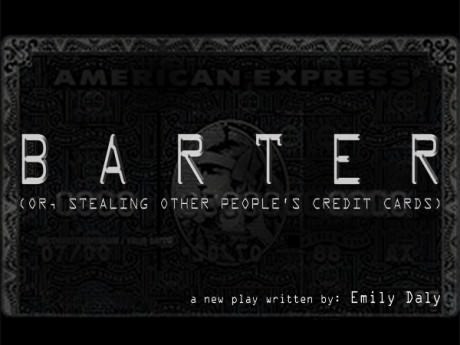 The actual plot defies description. Imagine if a famous heiress actually inherited her billions, joined the cast of Friends, and managed to temporarily crash the economy. It’s all very funny and also beside the point. At its heart, this is the story of a girl who unexpectedly loses her mom and the baffling, uncomfortable chaos, grieving, and going on when it happens – whether it’s today, 10 years from now, billionaire or not. Of course, her limitless little, black credit card doesn’t help matters. Lisa Jill Anderson as the heiress, Breanna Foister as her militantly liberal best friend, and Brian Edelman and Zak Kamin as two hapless guys who get drawn into their world and inadvertently set up the fall of the U.S. economy, are all just great. Contrary to the advertising, this is a careful character study and they hit every note.

The playwright, Emily Daly, clearly loves language and the dialogue sings with clever rants about Big Water, shoes, and an old suit. One truly inspired scene comes when two of the poorer characters first meet. Cherry (Breanna Foister), who does not pull in enough as a 5th grade teacher to make rent, must work distributing flyers for a spa on a street corner next to bar-owner Charles (Brian Edelman), who doesn’t do decimals. Sparks quickly fly — both in fury and attraction.

The funeral is also a brilliant moment of grief and wit. Director Jonathan Libman manages to balance all of this and create the freneticism of a riot with three chairs and a couple of folding tables. Only at Fringe could you see this genre-defying sitcom/sci fi/liberal protest/satire/drama. Did it succeed? The audience was silent for a full 30 seconds at the end and my jaw was on the floor. But leaving aside the possible end of money, at it’s heart, one woman must confront her and her mother’s life in brilliant words.

The answer is YES! This is quite a piece, but I guarantee it will not be whatever you’re expecting.