According to a press release and other advertising, Scena Theatre’s production of George Tabori’s Mein Kampf constitutes a “daring,” “savagely funny,” and “in-your-face dark comedy,” not to mention a “gem of international theatre” with “a volatile and taboo subject” that “only Scena would dare stage in Washington.” The source material makes it easy to see why.

Mischievously subtitled A Portrait of the Fascist as a Young Man, the 1987 German play, set in pre-World War I Vienna, tells the fictional tale of a boyish Adolph Hitler’s relationship with two Jews who guilelessly, and to humanity’s obvious detriment, spur him to abandon his misbegotten aspirations for a career in art and to seek fulfillment in politics instead. With this arguably tasteless premise, Mein Kampf harbors ambitions of grand farce and philosophical profundity, aiming to induce piercing introspection on the nature of evil as well as laughter at its fundamental absurdity. 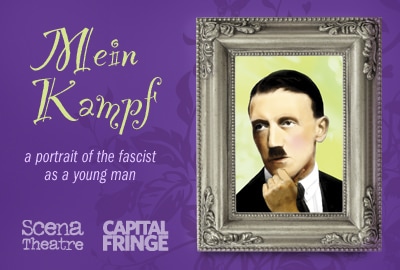 As it happens, despite the earnest efforts of a terrific cast (I give the show a three-star rating to applaud the fine performances) that includes Cameron McNary as Hitler and Stas Wronka and Stephen L. Williams as the Jews who befriend him, the production’s plodding two hours and forty minutes induce more boredom and bewilderment than righteous indignation or critical thought. Scatological humor mingles with lifeless, pretentious bromides on religion, death and sex that generate numbness and lethargy rather than enlightenment and provocation.

The play’s chaotic, often incoherent script, which seems unable to decide whether history’s greatest mass murderer deserves derision, contempt, or an uneasy combination of both, juggles multiple genres, motifs and plot lines with uneven pacing, fleeting thematic consistency, and jarring narrative transitions. Rarely does a play that says so much manage to say so little.

For more information about the show and to purchase tickets, click here.