Hayley Cutler is the choreographer behind this memorable hour of dance called Donna Has a Boyfriend. Her background is in the postmodern style. I was unaware that we have moved on from modern, but was very glad to get a taste of it. The music ranges from Bob Dylan to Buddy Holly to other less well-known and instrumental pieces. The dancers are barefoot and, while the movements are precise and beautiful, it’s more an exploration of familiar movement – like saluting or whispering in someone’s ear – than the rigid lines of ballet. The seven dancers of this Darlingdance Company are all well-trained and talented. They are Barbara Caldwell, Jennifer Caulk, April Gruber, Felicia Stevens, Megan Whittemore, Cara Zimbalist, and Rick Westerkamp (who also is the Managing Director). 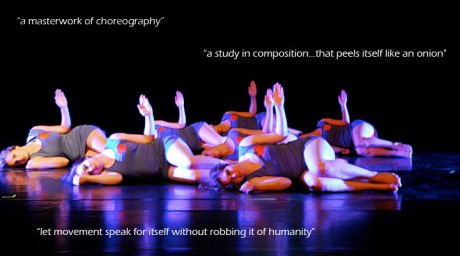 The three pieces that make up the hour have only a cursory relationship to the titled Donna or her boyfriend. The first begins with fiive black-clad dancers exploring a series of echoed movements. Cutler uses the stage well as a dancers alternate between unison, cadence and solo moves. The next piece is a lovely duet that probably inspired the title – dating by dance. The final piece includes 2 girls and one guy in another exploration.  This ended up being the most compelling piece for me. At one point, the dancers come to the edge of the stage and swing their arms in a circle slowly, again and again, in silence. At first I couldn’t quite believe they would do it again, but they began to build slowly and add to each movement and then to speed it all up. It was mesmerizing. Literally, as they began to spin faster and faster, you couldn’t look away.