As you enter the basement level of the Mount Vernon United Methodist Church for OUR Theatre’s modern adaptation of Sartre’s No Exit, the play’s Valet (Thomas L. McGrath) appears in character to direct you to your seats. “Enjoy your stay,” he creepily intones, then exits to find more ticketholders. It’s a clever touch for this powerful if mostly unoriginal production, which succeeds largely on the basis of its talented cast and Sartre’s viscerally haunting vision of hell. 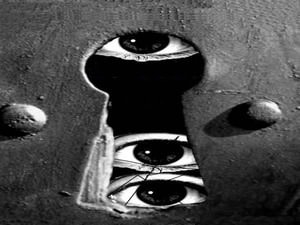 Originally written in 1944, No Exit constitutes one of Sartre’s most important works of existentialist thought, identifying purgatory not as some clichéd medieval torture chamber but as the judgments, pressures and demands of others. The play’s version of hell places three damned, sinful souls in a single room for all eternity, where they proceed to torment each other with sundry allegations of past wrongs and incorrigible guilt. As the play’s most famous line puts it, “Hell is – other people!”

In OUR Theatre’s updated version, Garcin, a French soldier who deserts his comrades during World War II, becomes Chad Rollins (Kenny “Kendawg” Littlejohn), a U.S. soldier who deserts his fellow soldiers during the present-day war in Afghanistan. The production never quite explains the added value or thematic novelty of this revision. Indeed, rather than emphasize the play’s universality, the alteration seems simply kitschy, as though its ostensible contemporary relevance would render its profundity obvious. A meaningful and genuinely original adaptation requires more than simply substituting one war with another, changing the protagonists’ names, and deleting period references from the original script.

Still, no performance of No Exit requires justification, and the fine cast and mostly intact existentialist narrative of OUR’s production easily justify the price of admission. In the play’s smallest but most memorable role, McGrath steals the show as a politely sinister representative of the devil. And as the hapless, troubled and neurotic residents of Hades, Hilary Kacser and Jung Weil join Littlejohn in delivering outstanding performances that convincingly portray their characters’ delusions, psychological fragility, and repressed guilt.

For more information about the show and to purchase tickets, click here.