The statement “Be careful what you wish for” takes on a whole new meaning through Pointless Theatre’s production of Imagination Meltdown Adventure. The play loosely follows Joseph Campbell’s interpretation of the Hero’s Journey through the story of Jack (Zachary Latta). Latta portrays a character whose refusal to leave his youthful world of imagination eventually causes him to lose the love of his life, Amy (Rebecca Ballinger). In an attempt to win her back, Jack makes a deal with an evil being that he quickly regrets as his two worlds of fantasy and reality combine, and everything starts to spiral out of control.

Director Lex Davis successfully draws the audience into a world of imagination through the use of colorful puppets and props. The set consists of nothing more than an empty black stage with a few add-ons such as houses and mountains to distinguish between the reality and fantasy worlds. 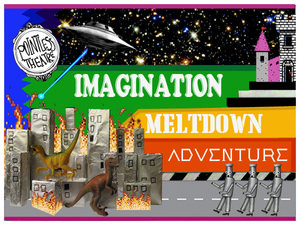 Though the color and props are interesting, what truly captivates the audience is the writing. Though simple, the story begs the question “What are you willing to give up in order to get what you most desire?” Jack quickly learns that magic comes with a price, and obtaining what he wants could force him to lose everything in the process.

If you are looking for an escape from reality into a new world of creation, then this is the show for you. Imagination Meltdown Adventure’s ridiculous and over-the-top humor is sure to leave you entertained.

For more information and to purchase your tickets, click here.