Life can be tough.
Some people are born with the cards stacked against them.

For others, life is a series of miscalculations and bad decisions…

It’s the day after 09-11-2001. Life is tough for the two individuals involved in a complicated relationship in Neil LaBute’s The Mercy Seat, the hard hitting drama presented by The Capital City Players of Washington, D.C. at the Capital Hill Arts Workshop as a part of this month’s Capital Fringe Festival. The Mercy Seat is a smartly performed, verbal showdown, high stakes game of intense drama and emotional warfare that will find viewers on the edge of their seats. 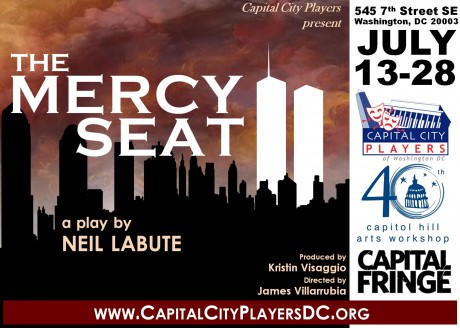 The events of 9-11 leave a searing resonance – painful, unforgettable memories for most Americans. Yet, The Mercy Seat is not reminiscent. This day after 9-11 play isnot about the 9-11 tragedy, heroes, or patriotism.

Still, The Mercy Seat is tragic.

This is a play about the tragic realities of human drama in a fairly common relationship – that of adulterer and mistress. The married Ben Harcourt (Eric Kennedy) is a man willing to risk everything – his marriage, his two daughters, and even his three year love affair – for the chance to rewrite his life story and start anew. A do over. Ben’s repressed anger and self-hate smolders like a volcano ready to blow; and Kennedy is dynamic with his portrayal.

The electrifying Devora Zack is superb as the high-strung, unrelenting Abby Prescott, a career woman in Human Resources working her way up Corporate America. She is feisty, independent, well paid, and presumably in love with Ben, but she’s conflicted. Abby is dealing with major issues in her life, …well two. Besides her boyfriend being married, Abby and Ben work together. She’s been promoted and now she’s his supervisor. Major issue number two (or is that three)? Ben wants to pretend that he’s dead, change his identity, and he wants her to go on the lam with him.

One life ends… another begins.

The Mercy Seat is a brave choice of theater for both The Capital City Players in it’s production as well as for the adventurous theater goer. The Mercy Seat is brutal – a gritty, combative, emotional rollercoaster. Buckle your seat-belts, it’s going to be a bumpy ride. But, it’s like the car wreck on the side of the road – you can’t look away.

The Mercy Seat is not to be enjoyed, but endured, and this firecracker production is well worth the cost of admission.

Life can be tough, but no one said life would be easy.