Cecily Marlborough and Gwendolyn Hamm (otherwise known as Karen Getz and Kelly A. Jennings) are two time-traveling cultural anthropologists here to study our culture. What you won’t really find in this production is a play, but two tangible characters who engage the audience in discussion. This means that this production relies mainly on audience participation – a tricky idea, as I’ve seen (many a time) actors who try to interact with an audience and are greeted with blank stares and awkward shifting-in-the-seats. 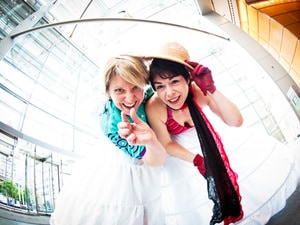 Cecily and Gwendolyn, however, are friendly, charming, and approachable, making their audience feel comfortable and welcome in their space (they will even rub your shoulders if they feel that you are tense). They decide on the topic of politics, and the notion of whether or not it is considered a business, industry, both, or neither. The discussion turns into a debate, and everyone got a chance to speak. In fact, at one point the audience became so engrossed that they talked amongst themselves, with Cecily and Gwendolyn standing aside, forgotten for a moment. There is nothing forceful about this production, and no pressure – just genuine, interesting conversation. The pair is humorous as well, sporting large, old-fashioned hoop skirts with clashing tops and quipping jokes whenever they can. Some audience members hung back after the show ended to continue their discussions. Cecily and Gwendolyn did not just provide an interesting atmosphere—they also inspired some friendships.