JR Foley’s play Jesus Le Momo is an exciting 50 minutes of a wild ride through the story of a wife and husband’s prayer meeting interrupted by the ghost of mad playwright Antonin Artaud. A meeting led by Father Jim (Tyler Budde) and his wife, Gretchen (Rachel Viele), started off in a hushed, solemn moment with their inn-mates Paul (Sean Sidbury), Debbie (Liz Kindler) and Sue (Molly MacKenzie) until speaking in tongues summons a ghost who calls him self “Le Momo” (Liz Salamon). The show gives a look at how supposedly spiritual people handle the appearance of the supernatural in their holy space. Faced with the unimaginable, the characters struggle with pacifying the ghost while playing along with his outlandish requests to help resurrect him without God.

For a small space at Fort Fringe such as the Bedroom, the director, Adi Stein, did a great job with adapting a show with such large physicality into such tight quarters. With the help of fight choreographer Kyle Encinas, the collaboration created an action-packed experience that never has a quiet moment. Lighting and sound designed by Elliot Lanes made the whole package complete by stimulating the audience visually and wrapping the room with edgy sound elements that suited the shows content extremely well, especially in scenes when Le Momo would throw temper tantrums. 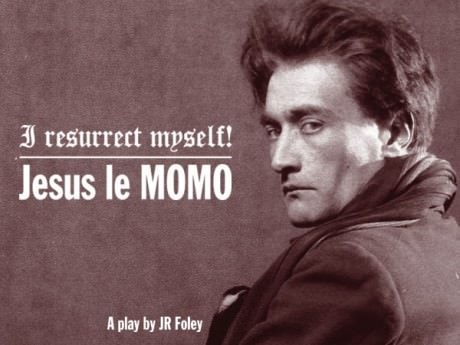 The ensemble meshed very well together to create an enjoyable performance, but the highlight for outstanding performance must go to Liz Salamon because of the powerful energy she brought to her undead character. There was never a moment where Le Momo wasn’t engaged in the action on stage and interacting with the characters around him, especially in instances when he would attack other characters out of frustration that they didn’t listen to his direction. Her ability to bounce around the space and hold the audience’s attention without going too over the top in her movement was excellent, which the conception of said movement can be attributed to Stein and Encinas as well. She is definitely a character you do not want to miss in the festival this year.

The only part of the show that peaked my critic’s ear was that sometimes moments were lost on the fast-paced French that were scattered throughout the script. It is wonderful to have actors that can play with foreign languages and accents in practice, but sometimes moments that deserved a laugh or a reaction were lost on those that didn’t have any prior experience with French, which is easily solved my more specific physicality for those phrases or just simply slowing down the delivery a little to show the subtext.

Jesus le Momo is not your typical show about people handling the undead, but a heart-racing flash of dark comedy. It was definitely not what I expected when I walked in and I was surprised in a great way!

For more information and to purchase tickets, please go to our Fringe Preview.