If the cinematic car crash constitutes the cliché that never dies (or kills or wounds its action hero passengers, for that matter), the new play presented by Unstrung Harpist Productions and directed by Tom Prewitt seeks to portray the darker, uglier side of its actual victims’ real-life experiences.

Shock/Trauma chronicles the effects – personal, social, familial, romantic – of Anna Parker’s (Julie Roundtree) crippling injuries in the wake of a devastating car crash that temporarily leaves her in a medically induced coma. Upon her return to consciousness, she faces not only a daunting road to recovery that proves physically and psychologically taxing, but also the feelings of guilt, bewilderment and helplessness of her friends and loved ones, including her boyfriend, Marc Radford (Evan Crump), who struggle in vain to help Anna – and themselves – restore a semblance of normalcy to their lives. 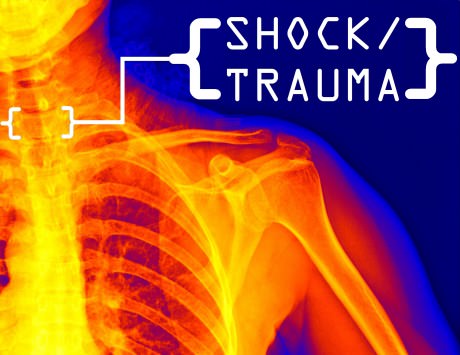 In this context, Marc’s potential culpability for the crash itself poses a particularly excruciating complication. Marc, who sat in the driver’s seat at the fateful moment but by sheer luck emerged unscathed, insists it was an accident, not negligence, and Anna professes to believe him. But a cloud of uncertainty persists. Marc’s pronouncements of innocence seem perhaps overly forceful, while Anna’s declared confidence in his story seems hardly enthusiastic.

Perhaps more ominously, Marc’s inability, or possible unwillingness, to understand or empathize with the long-lasting psychological effects of the accident – both on Anna and on him – strain their relationship to the breaking point.

The script, which wisely avoids casting judgments on its characters or proposing pat solutions to their hardships, depicts the emotional dimensions of post-traumatic stress with intelligence, profound psychological acuity and a determination to avoid the sort of Hollywood bromides that often accompany portrayals of suffering. As Crump, who also authored the play, writes in the program notes, “We expect Jason Bourne or the Dukes of Hazzard or James Bond to flip a vehicle spectacularly, kick the window out, and walk away, perhaps with a manly cut on their forehead, but otherwise unscathed. The reality is quite different.”

Unfortunately, at certain points, some of the play’s dialogue falls short of that standard, resorting to hackneyed, improbably poetic expressions of inner turmoil that sound precisely like the cinematic clichés that Crump derides. Some typical examples uttered by the protagonists: “The life we build ourselves is just smoke.” “Most of me is still in that car.” “I’ve been stretched taut, like an old rope.” And so on.

The absence of subtlety that mars much of the rhetoric does not, however, detract from the overall emotional impact of the production and the substantive insights of its exploration of post-traumatic stress. And Roundtree and Crump, for their part, deliver emotionally nuanced and ultimately heartbreaking performances that capture the psychological turmoil threatening not only to destroy their relationship, but also their very sense of self.

For more information about the show and to purchase tickets, go to our Fringe Preview.