Who hasn’t wondered what keeps Superman up at all hours? Why can’t Batman sleep? Why are Wonder Woman’s breasts so perky? The answer to the first two is obviously drugs (the answer to the third is, of course, magic). Maybe meth, maybe crank, or maybe coke. Now, if it’s the last in that list then they share an addiction with Supernova (played by Bill Coyne). Supernova is a junkie.  He fights crime with his powers over light and heat and blows lines off the piano while William Segal is playing for the show (he also co-wrote it). 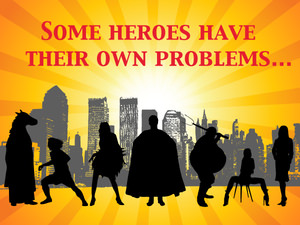 In his final encounter before being sent to rehab, Supernova faces off against a mousy (if maniacally self-obsessed) reality star wannabe (Dorea Schmidt).  During his attempt to rescue the kidnapped victim Dorea somehow absorbs his powers becoming Blackhole, the newest supervillain in town. At this point we go to rehab and find out that everyone has some weird problem, watch a love triangle develop into a true love match, watch addictions being overcome, and a family begin a long journey home (the reason I’m leaving this part vague, is that I don’t want to give away some of the best parts of the show {and they are really good}).  Then the entire team comes together to foil Blackhole at her first press conference. Huzzah!

Reasons Not to See This Show:  Ok…hmmm…I suppose that if you don’t like musical theater you shouldn’t come and see this show. And, I guess that if you don’t like boys in spandex, you shouldn’t see the show (but both of those things are delightful so I can’t imagine that people wouldn’t enjoy them {unless maybe they’re terrorists [and if you’re a terrorist and you’re reading this, stop being a terrorist]}).

Reasons To See This Show: Let’s start with the fact that it’s hilarious! What a laugh attack this show is. You will walk away feeling like you have been either punched in the gut by very sharp fingered, little ninjas, or like you just got done with an hour long ab workout, that’s how much you will be laughing.

Now let’s call some people out (I’m doing this in no particular order except that they are listed in this order in the program).  Bill Coyne (Supernova) looks great in a spandex suit and is quite a funny guy. Dorea Schmidt (Blackhole) is one of the standouts for me. He comic timing is impeccable and her ability to maintain character integrity while going for the laugh is wonderful.  Farrell Parker (Dr. Bonnie) has a beautiful voice and does a great job being the matriarchal figure in the group. Joshua Morgan (Critter).  Oh…Mr. Morgan.  So as not to have this turn into a love letter to Joshua I will limit myself to one sentence, though it may run on.  Joshua Morgan is monstrously funny in his role as the half-retarded Critter and is ridiculously mellifluous is each song he sings in that strong tenor voice of his and will break your heart into a million pieces in one of the best scenes in the play (you’ll know which one when you see it {and I don’t think I can run any further without some kind of punctuation [gotta take a break….deep breaths…long run.]}).

Leigh Jameson (Scarlet Letter) has a great studio voice. It’s light and sweet, but ultimately overpowered by the belters on the stage, though she makes up for it by being one of the best actors on the stage.  Phil Reid does not have the strongest vocals but definitely gave one of the strongest performances (he has an entire scene with a box of poptarts {and I love poptarts, but they can’t act for shit [so it’s even more impressive that the scene is so funny]}).  Vaughn Irving (Nightmare) had me swooning with his rich bass voice (and I doubly appreciate the fact that a bass role was written into a new work as I am a bass myself {and everyone want 18 rock tenors on stage nowadays}).  And that’s all the actors, they are all great.  I was really surprised that there weren’t any weak links in the cast. That is not something you generally get in Fringe. Do you think maybe people are actually taking new work seriously nowadays? That would be lovely.

Finally I have to say that none of these performances would have been possible had it not been for the writing of William Segal and Brendan Snow. And, of course, the brilliant directing of Brian Sutow. He really managed to bring this show to life for me.

Thank you guys for a wonderful night of theater!!  GO SEE THIS SHOW!!