Imagine you’re at your local diner with six of your closest friends. It’s your circle’s ‘Cheers Bar’ or Central Perk. Then all of a sudden, one of you creates a hypothetical situationin which you’re all cavemen. Before long, you join in on the scenario, it becomes elaborately detailed, and the parallels between the action of the cave-world and your own lives bear striking resemblances to each other.

Welcome to the Apron Theatre Company‘s production of Stone Age Recreation: An Operetta.

I am playing the role of Gus, and I knew to expect something wacky from this amazing group of artists after having given life to a new character once before in the Apron’s original action-comedy The Continuing Adventures of John Blade… earlier this year.

Working on John Blade was an absolute blast! I was beat up in some of the most creative ways I could ever dreamed of.

Stone Age Recreation employs a unique method of storytelling, combining silent movement theatre with lyrical singing. While the silent aspect of the show may seem daunting to some actors, I love being able to let his body tell the story.

As a dancer, having my acting beats timed out to cues in the underscoring music is extremely helpful. The dynamics and rhythm of the music allow my body to organically experience what the character is going through at any given moment in the show.

This character is a totally different character than any Ihave played. Gus is a protector. He takes care of those around him. Paternal isn’t really something people ask me to play very often. When you come across as the ‘Sassy Gay Friend,’ you jump at an opportunity to play something else… At least every once and a while.”

I am so excited to bring this show to life, and to see what audiences will take away from this experiment. There is something infectious about performing a piece of theatre like nothing you’ve experienced before as an audience member. Bringing fresh material to the theatergoers of DC is what I associate with this group of actors, directors, and designers. I jumped at the chance to be a part of a physical-theatre-piece-slash-operetta about cavemen.

It’s a challenging style of storytelling, but director Maria Benson is undaunted.

“I have a growing interest in the visceral impact of gestural theatre,” says Benson, “and this show has stretched that in exciting ways. Not only am I telling a story purely in stage pictures and movement, but it’s all underscored by a live orchestra. This makes the show an auditory and visual experience absorbed by the whole body, instead of being focused on the verbal section of the brain. The visual nature of the play also highlights the design elements. I’ve gotten to collaborate with some amazing designers to find creative ways to meld the modern and prehistoric worlds. It’s been truly exhilarating to see all the elements come together!”

“After writing and producing the musical Shirley Dreaming for the 2010 Capital Fringe, my brother Craig and I were very excited to continue to explore the ways in which our work can draw on the various talents of our community – from dancers to singers to saxophone players – and how all of those forms can work together to tell a story. We wrote a challenging piece and have been thrilled by the unexpected ways that the Apron’s amazing artists have interpreted it,” says Budde.

Will our tribe of cavemen face natural disasters the likes of which they are ill equipped to deal with? Will they make discoveries that lend themselves to things we enjoy in the 21st century? Will the beast strike, giving our tribe of cavemen a moment’s notice to save themselves? The only way to find out is to see for yourself! 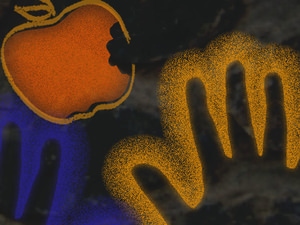