All-Nude College-Girl Revue or Why I Can’t Pass The Vetting is a hilarious autobiographical one-woman show performed and written by Lisa Faith Phillips. Inspired by a recent lawsuit from the Franklin Covey Corporation against her last show at the Fringe entitled 7 ½ Habits of Highly Effective Mistresses, Phillips decides to write a new show about all the reasons she could not be hired by the federal government, which includes the lawsuit. 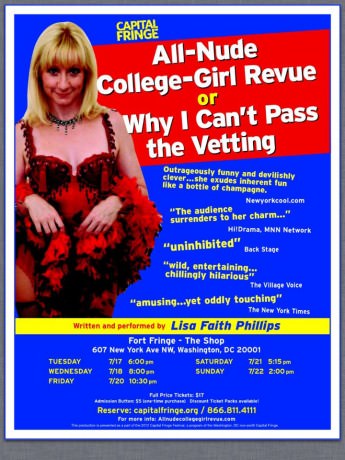 Phillips tells stories from her childhood and her adult life, taking the audience through her arrest for drug possession in high school and her stint as a stripper (her first job post college at a strip club that the show is named after). All the while, these stories are told in a very literary manner; the imagery in her words is vivid, real and funny. The stage is decorated with nothing but her but this is enough for the audience to be thrown into Phillips’ world and be interested her life. Phillips is an incredible storyteller and her show is fascinating to watch and to listen to.

For more information and tickets to this performance, go to our Fringe Preview.