Brian Feldman’s one-man “show” BFF takes its single audience member on a two-hour journey- literally- to becoming Feldman’s, well, “BFF.” Feldman’s “friend-building excursion” may take the audience member/new best friend to a baseball game (as mine did), to a vegan bakery (from a show the day before), or wherever Feldman decides his new friend would enjoy.

For my experience, Feldman decided that we would take the Metro to the Nationals baseball stadium to (briefly) attend that evening’s baseball game. There, we dined on Mexican food and lemon water ice; we didn’t watch the game as much as chat about our lives. 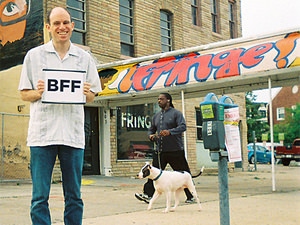 Certainly, there were nice moments that included memories I might have had with a friend. He asked a couple with a baby if they would mind taking a picture of us at the stadium with a sign he had made. They asked if he had extra paper and markers to make a sign of their own. (The sign read something along the lines of, “I came all the way from New Zealand to see my mom’s home team.” We parted ways and are not sure if the sign got the adorable, drooling baby on the stadium’s camera). We searched the stadium for dessert and ultimately decided on lemon ice over a smoothie or gelato. We discussed our favorite playwrights, what type of theatre my husband, an actor favors, and where to get good vegetarian food in this city. I felt comfortable speaking with him – not playing the role of a traditional, passive audience member – especially as the topics of conversation were more general rather than too personal.

While the production certainly has an interesting concept, there were several awkward moments. Feldman showed up several minutes late to begin, something one might accept from an actual tried-and-true friend but not from a stranger. Considering the Fringe warns audience members that there is no late seating, this was a bit annoying.

Feldman genuinely tries to get to know each individual audience member (which is helped by there being only one audience member per show), but this does not mean he doesn’t know which topics to avoid. (For example, the university at which I did my undergrad is now at the center of a huge scandal; while it does not involve me personally, it is not something I feel comfortable discussing with people I do not truly know, particularly during a “performance”).

This show offers the most personal attention this reviewer has ever encountered and a performance artist who is trying – and succeeding – to encourage audience and performer interaction. The experience truly amounts to, as Feldman describes it, the “Fringiest Fringe show” around.

The show departs from the Fringe Box Office.

LINK
For more information and to purchase tickets, click here.