The steamy heat of a Washington summer night added to the ambiance of the World Premiere of Me and the Devil Blues by Seamus Sullivan, after all the play is set in Hell. The band played smooth jams as patrons packed the Redrum at Fort Fringe. Zachary Michel (bass) and Robert Manzo (drums) laid down rhythms that guitarist Steve Attix soloed over with ease. Music Director Mark Halpern and Sound Director Neil McFadden made sure the evening sounded great.

Set Designer Andrew Berry made the show look like a typical late night television set – complete with a desk and a couple of comfy chairs. Despite a great sounding band the play was a comedy. Thankfully, Director Jason Schlafstein had a wonderful cast to pull the laughs from a large opening night crowd. 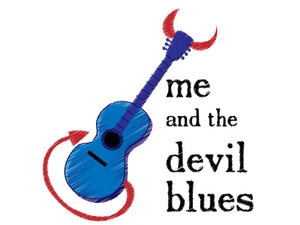 The play is based on a late night talk show that is hosted by the Devil (Alex Vernon) – which appears to have no end. The musical guest is famed Blues musician Robert Johnson (JaBen Early). In real life Johnson was rumored to have made a deal with the Devil at the crossroads.The other guest is Tamara (Maya Jackson) who plays a philanthropist Antichrist. She is also the romantic interest of Johnson. Drummer Robert Manzo plays the role of band leader and The Devil’s sidekick.

Alex Vernon is a natural as the late night show host, and JaBen Early shines as Robert Johnson. The show is original, funny, with good music and is a great way to spend an hour. The only thing I didn’t enjoy was the repeating jokes and scenes, which lost some of their humor after the third and fourth time the audience heard them.

Me and the Devil Blues packs plenty of laughs, so come on down to the Fringe and experience a late show complete with The Devil, presented by the Flying V.