Blanche: The Bittersweet Life of a Wild Prairie Dame is something special and unlike most musicals I have seen before. Onalea Gilbertson found a photo album of her Grandmother’s as she moved to a nursing home. She began to ask about the photos.  She took those interviews and wrote a musical, singing about the important moments in her Grandmother’s life. It is unique because the staging is part concert, part retrospective and part theater. Photos from the album play on a screen behind the action as Blanche’s recorded voice narrates her own stories between songs and Onalea acts out the photos when she’s not playing piano. 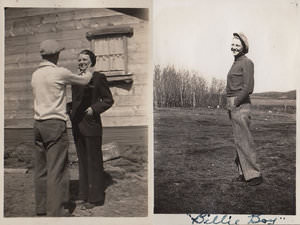 Three other actors play the important men in Blanche’s life, but their main jobs onstage are playing violin (Josh Henderson), cello (Brian Sanders), and guitar (Eric Richardson). Richardson also sings backup vocals. Onalea wrote all of the songs herself with Morag Northey and Jonathan Lewis. Rachel Avery directed and dedicated her work on the show to her own Grandmother.  he action is vaguely chronological as the songs explore the Depression, swing over to France and Onalea’s Great Uncle’s experience in World War 2, and then back to Blanche’s life after the war, having kids, growing old and moving on.

The music ranges from big band to swing to ballads and beyond, and all 18 songs are very strong.  “Weekend Parties” and “Getting Old Doesn’t Pay” were particularly fun and heartbreaking, respectively. In “Weekend Parties”, Onalea, as Blanche, sings about the parties they threw right after the war when she would dance all night…or at least until the police would come and shut them down.  In “Getting Old Doesn’t Pay,” she talks about being unable to get out of her chair and how her legs won’t move and implores that you have some fun while you’ve still got your looks.

The format, with the only spoken words being Blanche’s recorded ones, sometimes forced the songs to fit the narrative more than the music, but it’s no hardship as Onalea can seriously sing. Craft aside, the ultimate strength of the piece is the obvious love of a granddaughter for her grandmother. If you have ever sat by an aging parent or grandparent when it was too late to hear their stories or if they are now gone and you wish there was a way to honor them, please go see this.

If you simply love good music and strong storytelling, you will find it here.

For more information on the show, go to the show page.