The attempt to birth a theatrical piece rooted in the history of the Roman takeover of the land of Israel, the conflict for position of authority and favor of Caesar (Thomas McGrath) between Tiberius (John Crowley) and Pontius Pilate (Elliot Kashner), and the mystery of the man from Galilee named Jesus (Kofi Owusu) from a modern day perspective did not quite succeed in AP Caroll’s ECCE. However the potential for great work lies beneath what seems to be an under- rehearsed production. 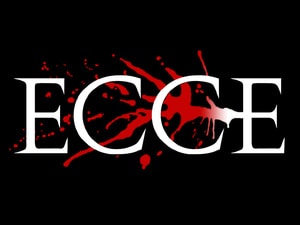 While the script provides an avenue for the audience to see the complex nature of the human mind and its struggles with ambition, power, righteousness and betrayal through these characters, as well as through the High Priest Ciaphas (Justin Mohay), Herod (Emily Whitworth), Claudia (Emily Kester), and Calserus (Colton Timmerman) – the production leaves much room for growth.

Odd directorial and blocking choices by Director Ed Churchill along with underdeveloped performances by parts of the cast hindered the presentation of a solid work at the performance I attended.

However, the performances of Keegan Cassady as Marcus Skippio, Joe Feldman as Barrabas and Emily Whitworth as Herod provided formidable and memorable moments in the production.

Overall, ECCE felt like an evening rehearsal more than an opening night performance. The lack of sufficient preparation showed on stage. Nevertheless, the glimmer of hope in this production is that it has the ability to become something beautifully magnificent as the cast and crew run the show and engage in further characterization. With more refinement and rehearsal, I am confident that ECCE will be a must-see in the near future.

For more information on the show and to purchase tickets. go to our Fringe Preview.