“Often times, I’ve observed that organizations feel forced to prioritize art, audience, and artist.  O Starsf the three, the artists are, more often than not, left to their own devices,” JR Russ, Vision Director of A Way of Life (AWoL) Productions states in his program notes.

Indeed, in AWoL’s latest production, A is for Artist, currently performing at the 2012 Capital Fringe Festival, Russ and Jeremy Pace are left to their own devices to tell it like it is – that is, in the life of an artist. Russ goes on to state, “This piece is dedicated to reaffirming the artists’ place at the proverbial table, with their own voice.” Pace and Russ literally use their own voices and experiences to directly and honestly address the audience about the hardships faced by artists of all types- dancers like Russ, poets like Pace, performers both. 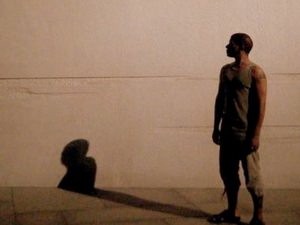 Russ, an arts administrator, dancer, and actor, focuses on the more pragmatic aspects of art, utilizing concrete examples to address the artists’ modern-day plight. For example, he addresses the lack of government funding for the arts, particularly in comparison with other countries. He also cites studies he has done, using Pace as his witness, recounting why many artists find themselves in such an economically-disadvantageous profession and what they try to do with their art.

Pace has a commanding presence, much more than one expects from the stereotypical poet, tucked away in his loft, tearing page after page of lamenting poems out of his notebook. From his harrowing accounts of homophobia in his native Missouri to his obsession with near-starvation in Washington, DC, the audience empathizes with him and does wonder why poets are no longer valued socially as often were the bards of old.

In fact, Pace’s presence is so commanding that he is frequently one step ahead of the lighting, telling his story instead in the darkness downstage. This could be an effective device – except that, eventually, the lighting catches up to him and the mistake becomes evident. Board Op Jerry Blackmon is running the technical elements solo but would do well to keep up with Pace’s quick, well, pace.

Both bring up a poignant topic. Artists often advocate for specific groups: art itself, feminism, LGBTQ groups, etc. However, both focus on one question: Who is left to advocate for the artists themselves? A Way of Life Productions, together with Russ and Pace, has decided that they will.  There are three more productions of A is for Artist left in the Fringe. Will you join them to become an advocate – for artists?

For information about the show and to purchase tickets, click here.