Ok…this one is a bit different. Start with one of the best curtain speeches (designed to get everyone to turn off their cell phones) I’ve ever seen, delivered by Karen Beriss who is telling her mom on the phone that she has to go. Then the show begins. A girl dances (Neelam Patel) to a beautiful song (the music arrangement was amazing {thanks, Amhara Buxton}….each piece really enhanced what you were seeing on stage without over running it). We discover that she is the creator, Light.  She pulls some people out of the audience (obviously plants {but it’s not weird, it’s cute}).  Each person describes what they are doing and who they are by describing the world around them and how they relate to it.  The only world they are aware of is the stage so when one very excited girl (Jessica Shearer Wilson) starts claiming that she can run around the world it takes a minute to realize that her world is the stage. This is strangely affecting. You watch as they develop relationships with each other and start working together. In the middle of the scene the audience must sing random songs to keep the actors going (that was awkward {I had fun with it, but it was still pretty awkward}). 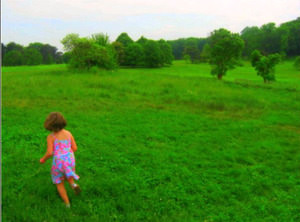 Soon they decide to build a spaceship out of junk on the stage (as a child does {and this whole time you are watching….wait…I need to get out of parentheses to talk about this.  Excuse me}).  This whole time they are in a toddler mentality.  Imagine the unlimited desire for discovery in a child.  Good.  Now add language. It’s quite compelling (far more so than I thought it would be).  So they build a spaceship and go to Mars because they want to explore new worlds (theirs is, after all, about 20’ x 20’). They get there and realize that they never left and that their world has not grown as they have. In a moment of spite the first child kills herself (Jessica Shearer Wilson). In a moment of rebellion and denial the second child holds her breath till she dies (Rachel manteuffel).  In moments of desperation the other children simply shut down (Heather Carter and Ashley G. Williams). You are left with the creator mourning her creations. There is a despair in this, but a strange hope as well.  I would love to believe that the creator weeps over the passing of each of its creations.

SO…let’s say that that’s the reason to see the show. It’s moving and delightful and filled with joy and laughter and bleakness and so many other things. And now let’s move on to why you should not see this show.

Next we have ten minutes of being told what the first show was about and what the second show is supposed to be. Personally, I hate being told what to think of art. Each artistic experience is deeply personal and will mean something unique to each person that sees it. It will resonate with different experiences and those resonant tones can’t be dictated. I’m sure that my interpretation of the first part will be heartily denied by many who read this (and that’s good {even though you’re all wrong} because it starts a debate {and things are learned and discussed in debates [even though you are all  still wrong]}).

And finally we come to a 45 minute long section of the show that is improvised.  So, these are not improvisers. They make that quite clear as they break the cardinal rule of improv every ten seconds. Someone will come up with a scenario and everyone in the room will say “No.  That’s not true..  And then proceed to talk over each other. This goes on until the most awkward bow you’ve ever seen happens and you slowly shuffle out of the theater.

I do think that the first part is worth sitting through the whole show (but maybe you have a “family emergency” 45 minutes into the show).  So check it out.