At what point does murder no longer qualify as murder? And what happens if murder is murder but the justice system is corrupted by politics? Who will ensure that justice is served? That is the premise for the fast-paced court room drama found in The Vagabond Players’ production of The Baltimore Playwrights Festival submission Lethal Injection. Written by Michael Reimann and Directed by Larry Pinker this play gets right to the heart of political corruption and ethical justice with the great state of Texas as its backdrop.

Reimann manages to create a riveting political drama that keeps the audience on the edge of their seats throughout the production. Every moment is captivating and compelling; it’s like watching an actual courtroom drama on television only much intense because the actors are able to translate their feelings into palpable emotions for the audience to experience. His work easily provides a strong descriptive setting for this play. Texas is prominently featured in the dialogue of the characters, the motivating plot points and is exaggerated into the assbackwards stereotype that non-Texans believe Texas to be.

The play tackles deep issues like political corruption; looking beyond the surface of the law into the broken mechanics of the Unite States justice system, using the stock character of the old fat southern judge as a vehicle to facilitate this exploration.

The Honorable Judge William Toffett (Marc Rehr) is Texas proud, old friends with the governor and the accused and makes his views known without mixing words to do so. Rehr gives this character a slow Texan drawl and makes him highly animated with simply gestures and facial movements, seeming subtle while importing a world of depth and complexity to the character. He is the motivating force behind the corruption aspect of the play and adds moments of off-color hilarity to the show.

Reinmann, as incredible as his work is, presents three large flaws in his play; one issue is that he jumps right into the courtroom without preamble or background. Everyone loves a story that picks up in media res but not having any exposition does not give the audience the chance to connect to the characters one way or the other. Arguably this could be intentional as the audience is meant to be the jury, and should thus come in blind with no previous bias or prejudice for or against the proceedings.

There is a scene in act two, that while extremely intense, seems superfluous and disjointed from the rest of the play. There is a brief reenactment on a completely dark stage except for the actor in the spotlight of the night Thomas Lofton (Lyon Beckwith) was murdered. While Beckwith does a frightening and outstanding job of showing us the maniacal side of his character and the terrifying moment leading up to his shooting; the scene simply doesn’t fit. It falls briefly inbetween submission of evidences as if trying to be showcased to the jury as a memory somehow caught on tape. This is both unnecessary and unrealistic as the jury would never actually be able to witness this, and it disrupts the perfect flow of an actual court setting that Reinmann has worked so hard to otherwise achieve.

The final misstep made by the playwright in this work is the ending. The scene before the final scene has the Prosecutor (Troy Hopper) and the Defense Attorney (Tor Tonnessen) making their closing arguments to the audience as the jury. It is deep and profound each of these actors delivering their intentions and meanings of the show in their own way. And the scene fades to black; creating what is assumed to be a strikingly profound ending. But then Reinmann brings an epilogue of sorts to the stage where Hopper’s character is seen discussing the results of the trial with Bryce Toland (Coreen Ayr Hamilton) his co-council. This cheapens the profound ending, as if it had been left up to the audience — acting as the jury it sent us away with deep things to think about, opposed to telling us how it ended like the white text seen wrapping up quick conclusions at the end of certain movies.

Director Larry Pinker rounds up a sensational bunch of actors to do justice to this work. And at times he almost over does the dramatic effect of the writing with his choice of sound cues. There are intense moments that occur throughout the show that Pinker then highlights with thunder sounds for effect. This cheapens the serious moments created by the actors hard work on stage. But aside from these moments and a few smaller technical errors, like having Hamilton’s phone ring to accept a call from the governor even though her phone is turned off in court, Pinker does a superb job executing Reinmann’s work on the stage.

With a cast of eleven actors each character becomes fully actualized and developed upon the stage over time. Seeing each person trotted in as a witness or a permanent placement in the courtroom keeps the reality of the drama fresh as it unfolds. Subtle nuances like Ty (Bruce Levy) and Kyle (Steve Izant) Wellington, the defendants, whispering to one another during certain testimonies, or they way they respond to one another when the other takes the stand really enhances the severity and seriousness of the courtroom setting. And all the actors who are meant to be characters from Texas provide us with a wealth of well accomplished Texan accents.

The play is unique and unlike anything I’ve ever experienced. You find yourself wrapped up in the courtroom proceedings and almost forgetting that you’re watching a play and not a live judicial event. The slight missteps in the playwright’s work are easily forgivable with how well composed and well executed everything else is, and are only points for improvement in this already fascinating work. 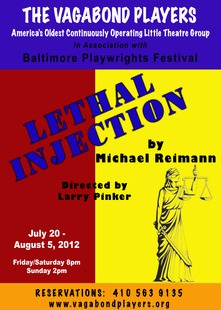 Lethal Injection plays through August 5, 2012 as a part of the Baltimore Playwrights Festival at The Vagabond Players – 806 South Broadway street in the heart of Fells Point, in Baltimore, MD. For tickets please, call the box office at (410) 563-9135 or purchase them online.