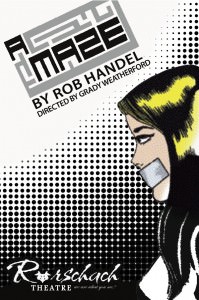 To find your way out of a maze you put your hand on the wall and follow the wall. Eventually you will find your way out. But what happens when the maze has no walls? It’s a maze drawn on the floor, or one that exists in your mind…or the mind of someone else.
Directing a play written by someone else is always a bit like finding your way through a maze without walls, but you have to consider that when the play is called A Maze, you may be in for some more unique challenges. There are 34 scenes in A Maze, 3 Acts, 8 actors playing 17 parts, a 10-year timeline, 10 different locations, a 30 volume comic book, a signature all time great rock album, actors have had to learn to play instruments and chop onions like a chef, not to mention that the path of the maze changes every time the floor moves…oh, right, it’s also non-linear. Keeping ones head on straight from scene to scene has presented itself as a challenge – what age is this character in this scene? Is this 2002, or 2012, or 1993? I’m so lost, oh right, I’m suppose to be lost, it’s a maze.

The one really beautiful thing for me about A Maze, though, is the idea that all these characters are lost and we are going to watch them find themselves, especially the artists. At its core A Maze examines the artistic process as it relates to being in a maze. Finding your way to your art, your message. If you have ever tried to paint a picture, write a song, play a role, write a story, take a photograph (at any level) A Maze will grab you and pull at those creative strings, the good ones and the bad ones. Why we do it, what compels us, how it helps us, how it hurts, the excuses we make for great art, and the agony of the art that just falls short.

And what do you do with great art that is based on something horrible? Do you take solace in the beauty that has emerged from ugliness, or do you destroy this new art because it’s born of evil?  Is it better to tell these stories, or just bury them? Talk about them antiseptically, just the facts, ah, but who presents the facts? Any viewer of the cable news networks knows that just because you aren’t seeing a show, doesn’t mean your getting the straight story. In today’s world you can get just as lost in the available information, interpretation, and opinion; as you would in the minotaur’s labyrinth in days long before GPS on you phone.

I’ve always been better asking the questions rather than answering them, and I think A Maze is just that kind of show. There’s a little bit of everything, for everyone…we’ll maybe not little kids, it’s not exactly a family show – but it is a show for thinkers, dreamers, and rock stars. A place to go and get a bit more lost than you expect, but you never know what you might find, and who you might meet getting back home again