I have been a fan of Estelle Parsons since I saw her light up the screen in her Oscar-winning role in Bonnie and Clyde. I had the honor of sitting down with her at The Kennedy Center when she was appearing in August: Osage County to record a wonderful podcast, and now, Estelle talked with me about appearing in the Broadway hit musical Nice Work if You Can Get It.

Joel: Are you having fun performing in Nice Work if You Can Get It?

Estelle: It’s wonderful and everyone loves it and everyone in it is lovely. Recently, we has a standby go in for Terry Beaver (Senator Max Evergreen) and he said to me, “I can’t believe I get on the stage and everyone is having such a great time. I could see it in their eyes. It was a wonderful experience!” I guess he’s right. We’re all having a wonderful time.

And now you have two new Tony Award winners in the cast.

It was so nice seeing Michael win that Tony. He always works so hard in any show he has been in – and I have seen most if not all of them. He always gives 5000% when he’s onstage. So congrats to the well-deserving Michael McGrath and to Judy who is hysterical in the show!

What is Nice Work if You Can Get it about?

It’s a group of popular and well-known Gershwin songs wound into a book by Joe DiPietro that’s a lot of fun and it takes place in the 1920s. It has wonderful dancing and wonderful people in it. Everyone is perfectly cast, and that’s been an incredible experience for me, because most experiences are not that way. All the choices that went into this show were made wisely.

Including you who come in in the last 30 minutes and then steal the show!

Tell me about the role you play – Millicent. 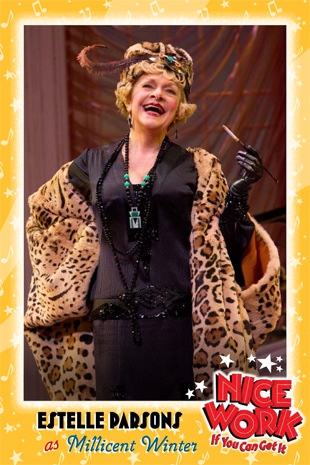 It’s a great role. She’s a successful businesswoman whose son (Matthew Broderick [Jimmy Winter] has spent most of his life just doing nothing. He says when asked about going to work, “Well, I’ve discovered that  it’s enough to be rich and handsome.”

It is and Matthew is…

Oh, he’s wonderful! He is a terrific human being – everyone in the cast is. It’s getting more and more that way. Before, everyone drank and now nobody drinks and everybody is friends and everybody’s nice and everybody’s polite.  It’s part of the ‘political correctness’ of our society and it’s reflected in the theatre.

Did you base your character on anyone you knew? Millicent sounds very Bette Davis-like.

No. She just ‘made’ herself. When I put on that costume by Martin Pakledinaz I said, “Here is my character!” When you see her you know exactly who she is. I wanted her to be more Mae West-like – to have some bodybuilders. Because she was a big businesswoman -she should have some bodybuilders and security guards. Well, it got vetoed, and I lost.

I like it too! I get a wonderful response from the audience, so that’s great!

What do you do while you are waiting to go on?

I come to the theatre at intermission and then I just have enough time to get into my 20’s makeup and go onstage.  So I don’t spend a lot of time there, unless I come early so I can enjoy the show. Being with everyone else – having such a good time.

What’s your favorite scene that you come early to watch?

I don’t watch any of it. I just hang around backstage. One day someone bakes something and one day someone will cook something. So, I just listen…and eat! [a huge laugh!] I haven’t seen it all since I got all costumed up.

Have you missed any performances?

Yes – I missed one, I got laryngitis and I couldn’t utter a sound. My standby Jennifer Smith went on for me.

She is so talented!

She has gone on for Judy twice Judy’s father died. Jennifer is a wonderful actress. She should have a huge career on her own because she is so talented. She is a well-known standby in musical theatre.

Jennifer was hysterical as Kitty in one of my favorite musicals – The Drowsy Chaperone.

Lisa Lambert and Greg Morrison wrote the music and lyrics. Bob Martin, who also starred as ‘The Man in the Chair’ co-wrote the book with Don McKellar and caey Nicholaw, who has become a very wealthy man from The Book of Mormon, directed and choreographed. And Georgia Engel and Sutton Foster, and Danny Burstein were in the cast. It was so much fun that I saw it 7 times.

I must have missed it because I was working.

You are always working.

Yes, and because I have always been working I have missed a lot of other people’s shows.

Not a bad thing Estelle! How many actresses have had a successful career like you?

Well… everyone else is dying along the way… so I am one of the few left! The list of available actors my age is growing shorter and shorter.

You know, I do tragi-comedy and a lot of other stuff, and most people don’t do that. I have a wide range of skills and activity. This just happens to be a spade of hiring for me. And I take roles, like this one, that other people wouldn’t take. This is a small part but a meaningful part. I tend to do that when I feel like working.

I’m so glad they cast you in this role because you’re a hoot in it.

Yeah – it was good casting.

I didn’t recognize you.

That’s funny – even my grandson didn’t recognize me either.

Have you been in a Broadway musical before?

I started my career with Ethel Merman in Happy Hunting. And I did Beg, Steal and Borrow  with Betty Garrett and Larry Parks and Eddie Bracken, and I forgot all those other people…And I did Three Penny Opera and The Pirates of Penzance with Linda Ronstadt.

Are you ever going to retire?

When you are an actress all your life you are in semi-retirement. It’s not like you have been working all the time. You’re working and not working. Retirement is not the same when you work in the arts.

How long will you be with Nice Work if You Can Get It?

I’ll be there through September. I think there is a Larry David movie that I am going to make.

Why should theatregoers everywhere come and see Nice Work if You Can Get It?

I can only tell you what people who have seen it have told me. A friend of mine came to see the show and she said, “I was hungry and tired and I didn’t think I was going to have time to eat and I thought, “How am I ever going to get through this? Then the show started and I woke up and thoroughly enjoyed the whole evening.”

Another friend of mine, who was diagnosed with a rather difficult disease, just by chance came to see the show. He told me how meaningful it was to him because it took his troubles off his mind and made him so happy.

Our director and choreographer Kathleen Marshall thought that everyone should have a great time when they come to the theatre and purposely made the show a good time.

I think it’s working because we are a very big hit!

Let’s do it again soon.

Estelle Parsons started her musical career in Happy Hunting with Ethel Merman. She played Mrs. Peachum to Lotte Lenya’s Jenny in Threepenny Opera, Widow Begbick in the American premiere of Mahagonny and the nursemaid Ruth in Joseph Papp’s Pirates of Penzance co-starring with Linda Ronstadt and Kevin Kline. She was most recently seen on Broadway in Good People by David Lindsay Abaire and August: Osage County with which she also toured for a year around the country, and co-starred in Deathtrap with Simon Russell Beale, in London’s West End. She won an Academy Award® for Bonnie and Clyde and played Roseanne’s mother on that sitcom for ten years. Estelle Parsons was inducted into the American Theatre Hall of Fame in 2004.