Being Revived, a new theatre company in Frederick, MD, is proud to announce their inaugural production: Completely Inappropriate: Songs to Offend Everyone. It’s a musical comedy review, and will be performed in August and features songs of a mature nature, many from lesser-known musicals.

“They deal with sex, love, politics, sex, body issues, parenting, homosexuality, relationships, sex, religion, sex, all the things they say you shouldn’t discuss in polite company,” according to director and Being Revived founder David Norman. “Some of the songs featured come from shows we are considering to mount in upcoming seasons, so they’ll also give the audience a sneak peek at what they might see in the future.”

Douglas: How did the idea for this type of company come about?”

David: The concept for this company first started gelling in my mind more than 20 years ago when I was living in Minneapolis. There was a very long list of shows that I wanted to do, wanted to see done somewhere, but no theatre was going to do them because they weren’t the big warhorse musicals that everybody knows. I’m sure every actor, every director, has a list a mile long of shows that they would kill to do but can only dream about. By doing some of these lesser known shows, many from major writers, in a concert setting we can give an audience a chance to experience musicals that otherwise would remain in obscurity. Just as I was trying to figure this out, companies started popping up all over the country that did exactly what I wanted to do. In New York there is Encores and Musicals in Mufti, in Los Angeles there is Reprise, along with others in many other places.”


Have you seen or done any of these “flop” shows before?

Well, in a way we all have. We’ve all seen or done some shows that were flops in New York originally but have found a life everywhere else: Working, Seussical, and of course Rocky Horror all flopped miserably. But I’ve always been drawn to the underdogs. I first got the chance to direct a truly unknown little gem five years ago with a scrappy little company in New York called Opening Doors Theatre Company, who stage lesser known musicals in a staged concert setting.

Their inaugural season included Bring Back Birdie, It’s a Bird! It’s a Plane! It’s Superman! and Whoop-Up. They announced that they were looking for a director for hoop-Up and I knew that I simply had to apply. I knew that score backward and forward and the chance to direct it was too perfect for me. They didn’t hire me at first because I didn’t live in New York, but the original director got another job so they then came back to me. It was meant to be. So I got to direct the first ever production of Whoop-Up! since it’s short Broadway run in 1958. I am more proud of that accomplishment than of any other production in my long career. I know that sounds weird, and some will scoff, but forgotten musicals are really where my heart is.

Then this past spring I directed the 25th anniversary production of Late Night Comic, which had a short, tumultuous life on Broadway in 1987. Like Whoop Up, this was the first time the show saw the light of day since it’s original run. The composer, Brian Gari, even came down from New York and attended the entire run of our production. He was thrilled and touched to see the actors and audiences reactions after the negative experience of the Broadway run.

What do you have in store for the company?

Without listing specific titles, I can say that we will be doing works from major writers and composers such as Charles Strouse, Cy Coleman, Cole Porter, Rodgers and Hammerstein, and William Finn. I am hoping to also present shows from contemporary writers that haven’t found an audience yet. Even the name of the company is a tongue-in-cheek homage to Stephen Sondheim, who may also show up in one of our seasons in the future.”Completely Inappropriate features Norman as a performer as well, along with Jeanine Collins, Christine Galante, Karen Paone, Will Heyser, Andrew McClain and Jonas Dawson on piano. The cast members have been featured in many other productions with companies all over the tri-state area, including Maryland Ensemble Theatre, The Fredericktowne Players, and The Old Opera House. 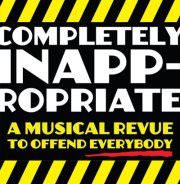 Performances are August 23, 24, 25 at 8pm at the Cultural Arts Center of Frederick – 15 West Patrick Street, in Frederick, MD.. Tickets are only $10, cash only please, and are available at the door. Seating is general admission, and please be advised due to content the show is recommended for ages 17 and up. For more information, contact David Norman at thenote29@aol.com.