Richard Rodgers (Music) and Oscar Hammerstein II (Book and Lyrics) are a solid example of a composing team being ahead of the times. Just as in South Pacific, the dynamic duo takes on social issues in musical form with The King and I. Using the book Anna and the King of Siam as source material, the musical explores what happens when a confident and progressive school teacher (Anna) from England, with a view towards gender equality, takes on the task of teaching the King of Siam’s children. In the process of two cultures colliding, the King, his children, wives, and Anna develop strong bonds and learn something about the complex world in which they live and their collective place in it. In the story, culture shift occur and relationships change – potentially for the better. 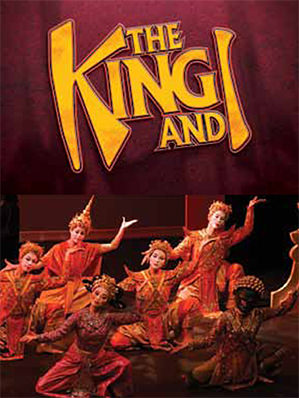 Wolf Trap and Atlanta’s Theater of the Stars do an admirable job presenting this classic tale under the direction of theatre veteran Baayork Lee. The Wolf Trap stop (the first in a 2-city tour, which will next go to Atlanta) treats audiences to first-rate singing and high-quality production values. Acting-wise, several company members also have standout moments. On the whole, this production is one that deserves to be seen.

Of note, Ronobir Lahiri is quite perfect as the King of Siam. His characterization embodies a political and social leader influenced by patriarchal norms and traditional ideas of the role of a leader. We can also see, through Lahiri’s portrayal, that the King is inquisitive and charismatic in addition to being domineering. It is nice to see that Lahiri does not play up the domineering trait so much so that the other dimensions of the King’s nature fade to the background. His commitment to a multi-dimensional take on the character has a big payoff in the final scene where we witness the culmination of the King’s progression as a person and a leader as a result of Anna’s influence. In this case, the final emotionally-charged scene packs a punch, but it also doesn’t seem to come out of the blue thanks to Lahiri’s complex and consistent portrayal of the King throughout the show. Singing wise, Lahiri is also a delight. His rendition of “A Puzzlement” is a highlight.

Victoria Mallory is somewhat convincing as feisty school teacher Anna though she is more convincing when she is playing off Lahiri than when she is simply teaching the children or engaging with others at the palace. I would have liked a bit more “bite” in her portrayal (but I understand this may be the result of a less than ideal directorial choice). She certainly sings the role well and has a nice rapport with the rest of the strong ensemble. As a veteran of the Broadway stage, her singing is very strong and textured. Her diction and song interpretation skills are particularly commendable. Mallory’s rendition of “Hello Young Lovers” demonstrates her solid singing skills while exuding warmth and emotional intent.

Three other actors deserve mention. It is clear that Jee Hyun Lim, as Lady Thiang (one the King’s wives and mother of the heir to the throne, Prince Chulalongkorn), is a very gifted opera singer. Her take on the classic romantic song “Something Wonderful” is the standout vocal moment of the show. Her skillful interpretation of that song more than makes up for her otherwise stiff and underwhelming take on this character when she is a focus in a non-singing scene.

Ali Ewoldt, as the King’s newest young wife Tuptim, is an extraordinary mix of a talented singer and actress. Ms. Ewoldt’s endearing yet fierce portrayal of a girl who is unhappy with her position in life yet determined to make a change is noteworthy. With her narration of “The Small House of Uncle Thomas” and her passionate and convincing scenes with her forbidden lover, Ewoldt makes it abundantly clear that she has a long (and hopefully successful) acting career ahead of her. All of her songs, but especially “I Have Dreamed” and “We Kiss in a Shadow” are sung with exquisite precision.

Josh Dela Cruz as Lun Tha may only have a few moments in the spotlight when compared to the rest of the principal cast, but he certainly makes the most of them. His tender tenor voice, good looks, and great rapport with Ewoldt allow the iconic “I Have Dreamed” scene to become one to remember. He should be commended for his realistic portrayal of the forbidden lover.

The strong cast of actors, including an ensemble of adorable local children as the King’s offspring, is backed by stunning production values worthy of a royal setting. The costumes (provided by Theatre of the Stars, no design credit given) are colorful and special attention must be paid to the ballgown Anna wears when English officials visit the palace. The stunning scenic design (Kenneth Foy) is functional yet majestic with multiple scrims and massive Buddha statues. It is delightful that nearly the whole of Wolf Trap’s massive stage is used (a rarity in touring theatrical productions at that venue). Kirk Bookman’s lighting design is subtle yet effective and meets the challenge of the lighting a show for this outdoor venue. Likewise, Peter Fitzgerald’s sound design is minimal, but effective.

Susan Kikuchi’s choreography (based on the original Jerome Robbins choreography) is captivating, intricate and performed amazingly well by a cast of talented young dancers in the second act’s mini-ballet “The Small House of Uncle Thomas.” Jessica Wu, in the lead dancing role of Eliza, executes the choreography exceptionally well. Under the direction of Eugene Gwozdz, the 21-piece orchestra fills the Wolf Trap venue and plays the classic score with vigor and enthusiasm.

I wholeheartedly recommend this production. Local area theatregoers should make an effort to see it. Likewise, the theatre patrons in Atlanta should also look forward to the tour coming to their city.

Running Time: 2 hours and 40 minutes including an intermission.