On Friday night, I had fun at the Victorian Lyric Opera Company, where I have previously enjoyed several Gilbert and Sullivan performances. VLOC is a ambitious repetoire company specializing in masterpieces of the Victorian era. This time the audience was treated to a rarely performed operetta by John Philip Sousa. With a large company of mostly local talent, VLOC produces several large productions each year, performed in the Rockville Civic Center. Elaine W. Kass skillfully directed the large cast, and Joey Sorge and his large orchestra beautifully performed Sousa’s melodic score. A special kudo to Stage Manager T. Tamura Gardner for her fine work.

The American Maid also known as The Glassblowers, is a lively production featuring plenty of patriotic marches in the score which the audience thoroughly enjoyed. The production of a rarely seen piece, The American Maid provides a time capsule of life as known in 1898, surveying the Spanish American War, class conflict and the early labor movement. We are treated to a wide selection of Sousa’s music much of which sounds familiar but also includes lesser known songs. The plot revolves around romantic confusion – which is of course resolved by the end of the production – but which leads to some dramatic pieces and limited character development. We are glad that all the couples achieve serendipitous reunification by the end, and no one is left unmatched. 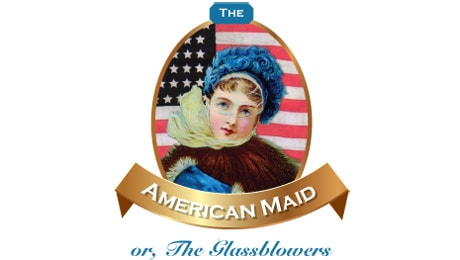 The story starts out in New York City at a Fifth Avenue mansion, at a reception honoring a Duke from Great Britain who is supposed to be the matrimonial target of social – climbing mothers and their debutant daughters. The daughter of the house rejects a proposal from Jack Bartlett, a young dilettante millionaire and challenges him to prove his worth. He promises her that he will get a real job as a common laborer, and goes to Cuba to fulfill his promise. Meanwhile the Duke, through a miscommunication, gets engaged to another woman, Annabelle, and Jack also gets involves with the wrong woman, Geraldine.

Both couples somehow end up at a glassworks in Cuba and Jack becomes a spontaneous union organizer, trying to improve working conditions at the factory and earning a troublemaker reputation in his original social circle. Next the starcrossed lovers extricate themselves from the factory and the pending strike because war has been declared against Spain. Everyone volunteers, including the other factory workers, providing more reason for the introduction of Sousa marches. Of course, the troops return victoriously and everyone is recognized as heroes, whether military men or female red cross nurses.

This is a precursor of the modern musical, in which there is a little dancing, a little frustration, a little physical comedy, and all is worked out for the best by the end. While much talent is on display, there are numerous cliches and stereotypes and an abundance of sentimentalism and jingoism. There is a period acting style accompanied by rich operatic voices and a large orchestra and choir. Considerable comic talent is displayed, including a fun piece in which the melody is annotated by percussive lunch pails.

I also liked the inclusive of some visual drop-downs with black and white pictures of factories and scenes from battlegrounds which helped to provide context for the romantic and military adventures of the cast. It was interesting to be drawn back to a time in which it was possible to take a little trip to Santiago, Cuba without thought of the political ramifications or any barriers to getting back into the US of A.

The lightning and effects by ‘The City of Rockville Staff” are on target. Pictures projected on the stage portraying the taking of the hill at Santiago adde verisimilitude to the performance. The use of a disco ball is somewhat distracting, but nonetheless an interesting addition to the whimsical nature of the production.

Laura Whittenberger (Rose) is charming and perfectly cast as a flirtatious ingenue playing off Thomas Mirenda (cast as Stumpy). She is superb when she sings “We Chant a Song of Labor” and “My Love is a Blower,”  as well as “When you Change Your Name to Mine.”

Overall, it’s a very enthusiastic performance by The Victorian Lyric Opera Company, filled with beautiful harmonics and moments of vocal excellence by Melissa Chavez (Geraldine Pompton)  and Denise Young (Mrs. Vandeveer). The audience favorite is Blair Eig (Silas Pompton), who received many laughs throughout the night. The energetic and endearing portrayal of Annabelle Vandeveer (Shelby Claire) is countered by Sean Pflueger’s portrayal of The Duke of Branford, who sings the role beautifully.

The American Maid has one more performance TODAY, Sunday, September 9, 2012, at 2 PM at The Victorian Lyric Opera Company – at the F. Scott Fitzgerald Theatre –  603 Edmonston Drive, in Rockville, MD. Purchase tickets online or at the door.