It’s not easy replacing a local theatre icon, having to play 8 kooky characters and trying not to become lunch for a man-eating plant puppet, but Matthew Schleigh successfully did them all it and the audience ‘ate it up’ at Olney Theatre Center’s Little Shop of Horrors.

Joel: You replaced Bobby Smith who is now performing in Jacques Brel is Alive and Well... at MetroStage. How did you get the roles(s)? Why did you want to play these characters?

Matthew: I went to auditions during the winter, and a few weeks later I received a call asking if I’d any interest in covering both the Seymour and Orin tracks. I accepted the opportunity as a means to learn how two very respected actors each approach their craft. And I’ve never been sure that I’d be typed as one of either of those characters, so I was grateful to be included in such a project.

As an understudy, how many rehearsals did you have to attend to prepare to replace Bobby? Who worked with you to prepare you to take over? Were you in the ensemble before taking over the role(s)?

We are required by the union to have weekly rehearsals for all of the understudies, whereby Renee (our SM) and her lovely ASM’s put all three us through the ropes of blocking and choreography should any of us have to go on.  When it was known that I was to be taking over for Bobby, our wonderful crew stepped in to insure I knew where and when to enter and what to wear (thanks Renee, Ben, Alicia, Gracie, Brie, Sam, Lizzie, and everyone else!).  And yes, one may have seen me earlier as that drunk laying on the grates during “Skid Row.”

A derelict: He starts as a sight gag. Bobby was asked to pop out of the sewer.  With his wig and hat I feel like Johnny Ramone meets Annie Hall.

Customer 1: Introduces the plot thrust that this “strange and interesting” plant is a hit for business.

Orin: The sado-masochist dentist, the villain.  It’s such a joy to play a villain, but it’s been even more a joy to watch Bobby create his dentist.

Customer 2: Helps create the buzz opening act 2 of the booming business the florist shop as become. I look a bit like Clark Kent without the brawn.

Bernstein, Mrs. Luce, and Skip Snip: These 3 all seek to take advantage of Seymour ‘s success with Audrey Two. I’m told I invoke Ron Burgundy and Jim Carrey, and I’ve got skinny legs.

Patrick Martin: Another opportunist, but to say more spoils the ending!  We thought Bobby looked like Andy Warhol.

I don’t know who seems most like me. Perhaps the bum in the sewer…

Which characters were the most fun to play?

Orin. Hands down. There are many more layers to him than I would have expected, and I know I’m gushing, but I believe that’s due to watching Bobby approach him. I dreaded preparing Orin’s second song, “Now (It’s Just The Gas),” yet now I’ve found that to be the most fun song to perform each night. He also has the most interaction with James and Carolyn, both of whom I was excited to work with. I hope to again under different circumstances!

Which characters were really tough to play?

Bernstein, Luce, and Skip Snip provide the thrilling challenge of quick changes for drastically different characters within the confines of one song. It’s the closest to farce I’ve faced yet!

Did you have you had any trouble during a performance trying to make sure they they all sounded differently? And what was the craziest experience you have in a performance playing these characters?

Every performance is a challenge to make them sound different! I don’t know how Bobby kept them straight. One evening I started Mrs. Luce by singing Bernstein’s lyrics and somehow got back on… But I fondly remember running face first into a pole onstage while exiting as Bernstein.

Does Orin have any redeeming qualities? Do you like going to the dentist and have you ever been offered or given laughing gas during a dental procedure?

It’s difficult for me to comment on Orin since my job has been to personify the choices Bobby and Mark (our director) developed throughout the rehearsal process. My immediate concern is to make sure I’m standing where I need to be and saying lines as they’ve been directed to be said so as to maintain the integrity of our production. And I’ve never had laughing gas personally, only local anesthetic. Although perhaps I may want to try it, as for some reason I dread the dentist more on each visit…

How difficult was it to keep your energy up so that the performance was fresh night after night? And do you have any secrets to share on how you keep up your energy?

I’d say the panic of having to step into the role like this keeps me on my toes! It’s actually been the opposite for me: I’ve cut down my caffeine intake so I can settle into the track and cut down the nerves!

You also  understudied the role of Seymour. Did you get a chance to play Seymour?

No, I didn’t step in for James, and I’m very grateful!  He’s did such an exceptional job, I’d be terrified to have to step in!

You have performed with several of your cast members in other productions at other venues. Tell us about that.

Shainte and I were brother and sister gods in Perseus Bayou,  (at Imagination Stage) and Kara and I ran amok in Peter Pan (also at Olney), and I played characters that were nuisances to each!  I’ve worked with Russ in a couple shows at Toby’s Dinner Theatre, but I’m still hoping for a chance to play off him.

What’s next for you on the stage after Little Shop of Horrors?

Come out to the RenFest for the last 4 weeks! I’m playing in an Irish band called the Hooligans. After that I’m set to perform at Imagination Stage in Seussical through the holidays. 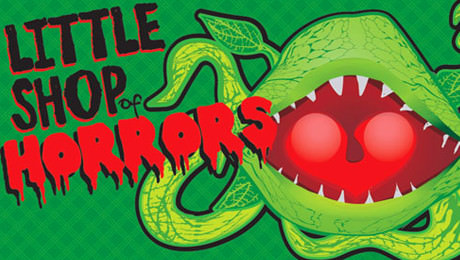 Why do you think Little Shop is still so popular?

Who wouldn’t love a Faustian tragicomedy with doo-wop, dentistry, and a flesh-eating alien plant that talks? Feed me, feed me all night long!