Take a bite out of dance

Call it intuition, cultural channeling or just a hunch, but the feeling here is that this is going to be a lively and wide-ranging dance season. It’s also going to be quite diplomatic as it strives to include edgy, the familiar, and the ripe for rediscovery. There’s also more than a hint at the supernatural invading dance.

Here’s a list of topnotch dance programs in the coming months; most have discounts for purchase of a series. All are worthy of your support.

Dance companies see winter coming long before the rest of us. Many of their performance dates have been booked since May, and their season brochures have long since gone to the printers for distribution to potential subscribers.

The Washington Ballet was among the early birds this year, with internet subscriptions offering a 20 percent savings. Now the company suggests a custom subscription option in which you can pick which three performances you would like to attend and save 10% off the full ticket price. The following dance programs come highly recommended.

Dubbed “Seduction of the Senses,” the new season opens with the company premiere of Dracula at the Kennedy Center Oct. 24-Nov. 4. This wildly theatrical ballet stakes its claim as this Halloween’s most thrilling adventure – can’t wait to see two of my favorite WB dancers, Luis B. Torres and Maki Onuki as Count Dracula and his lover Harker.

L’Amour (Love, Baby) promises a long, loving look at amour by three choreographers at the Sideny Harman Hall Feb. 13-17. Rounding out the series will Stars & Stripes Feb. 21-24, Cinderella, and the world premiere of Hemingway: The Sun Also Rises, choreographed by Artistic Director Septime Webre, with Jared Nelson as ‘Papa,’ back at the KenCen’s Eisenhower Theater May 8-12. Add to that a children’s ballet series and, of course, the option to buy tickets for the always-sold-out The Nutcracker at the Warner Theater Nov. 29-Dec. 7. Call (202) 362-3606, or visit their website.

Many local ballet fans have already purchased the Kennedy Center’s 2012-13 Ballet Series, some opting for the Saturday matinees where you can catch an up-and-coming star. Not to worry, though, as there is still time to select a seat for the Mariinsky Ballet (a.k.a. Kirov) Oct. 16-21. One of the hottest choreographers around, Ratmansky offers a contemporary take on his Cinderella, set to the gorgeous Prokofiev score played live at each performance.

The Suzanne Farrell Ballet follows with a mixed repertory program Nov. 7-11, special for Columbians who have followed her career with the New York City Ballet, once based at Merriweather Post Pavilion. Other highlights in include our country’s oldest classical troupe, The San Francisco Ballet in a mixed program Nov. 13-18, and Ballet West’s rendition of The Nutcracker.

In 2013, look for the National Ballet of Canada in Alice’s Adventures In Wonderland, created by Christopher Wheeldon. our two favorite New York City troupes, NYCB and ABT, and the return of Ballet Across America in June. As a bonus, ballet series subscribers can opt for Alvin Ailey tickets. Here’s a tough ticket to find, especially when Columbia’s own Alicia Graf is dancing – worth the price of any subscription.

A cool invitation to dance

“The best way to learn about other people is through their culture,” announced Kennedy Center president Michael Kaiser in his annual speech to press and supporters. It was the first word we had of the momentous Nordic Cool Festival, Feb. 19 through March 17, 2013. The event (throughout the Kennedy Center complex) features traditional and contemporary expressions of Nordic theater, dance, music, visual arts, literature, design and film and will include highlights from the cultures of Denmark, Finland, Iceland, Norway and Sweden as well as Territories of Greenland, the Faroe and Aland Islands.

In addition to the performing arts, Nordic cuisine will be highlighted in the KenCen’s restaurants and demonstrations by these cool chefs will be featured at the Millennium Stage where presentations are always free each evening at 6 p.m.

The Kennedy Center has promised more free programs this season. Check out the website. You might even find a ticket for the Kennedy Center Honors Gala Sunday evening, December 2nd. Others can catch the televised show on December 26th.

Ballet Theatre of Maryland celebrates its 35th season with four distinct programs at the Maryland Hall for the Creative Arts in Annapolis. For family viewing, BTM performs The Dancing Princesses, a world premiere Oct. 19-21, The Nutcracker two weekends, Dec. 8-9 and 15-6, and Coppelia on Feb. 22-24. Balletomanes take note of the closing All American Program with a nod to Antony Tudor and his Continuo April 12-13. To subscribe, call 410-224-5644.

The Baltimore Ballet will be part of Free Fall at the BMA Saturday, Oct. 20, at 7:30 p.m. The lecture/demonstration will introduce ballet basics and some variations from famous ballets. See how dancers train and then try out some dance moves on stage. The performance is free, but you still need to reserve a ticket, as space is limited. The Baltimore Ballet is also presenting The Nutcracker at Goucher College, Dec. 8. Tickets always sell quickly, so send an e-mail to info@baltimoreballet.org.

Baltimore’s Theater Project is a terrific place to watch dance – both for the atmosphere and range of talent showcased over the past 40 years. Daydreams + Nightmares Aerial Theatre, a high energy explosion of aerial circus maneuvers, kicks off the dance season this weekend, but you must wait until the new year to catch Ballet Theatre of Maryland in Frontier: The War of 1812, a ongoing celebration in Charm City. Vincent Thomas brings his VTD Dance Company to the Project March 14-17; The Collective and Clancy Works Dance Company, March 21-24, and Deep Vision Dance Company April 25.

For unabashed, fabulous entertainment, don’t mis  Rasta Thomas’ Bad Boys of Dance at Montgomery College’s  Robert E. Parilla Performing Arts Center in Rockville Friday and Saturday evenings, Sept. 14-15. If you don’t take my word, check out the Bad Boys’ Website for a quick look at this incredible talent. Rasta grew up in Maryland, won every award for his ballet technique, performed on Broadway in Twyla Tharp’s Movin’ Out, married a gorgeous ballerina from Baltimore County, and developed a company that can’t be beat for entertainment value. As a bonus to fans, Titans of Dance Intensive has been confirmed. Teachers Rasta Thomas, Adrienne Canterna and others will lead a dance workshop at the Best Western Plus and Conference Center in Baltimore Sunday, Oct. 7, 9 a.m.- 5 p.m.

University of Maryland’s impressive 2012-13 dance series has the return of Bill T. Jones in February. Both men represent the best in American dance and have been honored for their achievements.

Ailey II (the famous troupe’s second company with just as much verve and excitement) performs at Towson University’s Stephens Hall Theatre Sept. 15. This troupe has spirit and energy to spare, feeding off some of the country’s best dancers as they pass through the New York City studio. Bring the kids. For more information and possible classes with the dancers, call 410-704-ARTS or check their website. 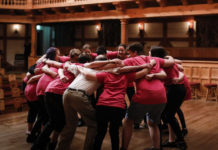