Love Story: The Musical, based on the well-known Erich Segal novel and film, originally premiered at the UK’s Chichester Festival Theatre in 2010 and later that year transferred to the West End where it enjoyed a limited run. America’s oldest theatre, Walnut Street Theatre in Philadelphia, has taken the bold step of staging the American premiere of this small, chamber musical to open its 204th season. For that, Producing Artistic Director Bernard Havard deserves kudos as more and more regional theatres are playing it safe with seasons completely filled with well-known musicals and plays due to the risky economic climate. The risk generally pays off; it’s a solid production due to some fine musicianship, stellar production values, and some good acting moments.

This musical, with direction and musical staging by Annabel Bolton, chronicles how a straight-shooting, piano-loving Italian of modest means, Jenny Cavilleri (Alexandra Silber), falls in love with the preppy, wealthy WASP Oliver Barrett IV (Will Reynolds), a jock who struggles with family expectations and is destined to study law. Both are receiving the best education possible – when we meet them in 1963, Jenny is studying at Radcliffe and Oliver is at Harvard. Through the next four years, they endure relationship hardships and make sacrifices to ensure their marriage survives due to the immense love they have for one another. Jenny’s unexpected illness disrupts their dreams of a long life of happiness together.

The stage adaptation begins with Jenny’s wake and then proceeds to turn back time to show how the two lovers met and explore the bond that they shared during their brief, but life-altering, time together. This ‘recollection’ framing device ensures that even those few that are unfamiliar with the source material will know how it all ends. It allows the audience to focus less on ‘how it will all end’ and more on the path the relationship takes from an emotional standpoint. Whether this is a good choice is up for debate.

Thanks to fine work by the ever-talented Alexandra Silber, who made her Washington, DC cabaret debut last year at The Kennedy Center’s Barbara Cook’s Spotlight Series, audience members can immediately fall in love with the strong and independent Jenny and see why Oliver falls so deeply in love with her. She’s charming, charismatic, and full of vigor. Silber sings impeccably well and demonstrates great emotional range, particularly when she is singing. From her first song, “Jenny’s Piano Song”- where she explains who she is and what her future might be – to her last romantic duet with Reynolds, “Everything We Know (reprise),” her voice gloriously fills the historic Walnut Street Theatre.

Will Reynolds also possesses a strong voice and, at times, demonstrates great chemistry with Silber, particularly when they are playfully arguing. He is strongest when playing off Silber although his interactions with those playing his family members (Paul L. Nolan, as his father, and Jane Labanz as the father’s love interest) can be a bit cartoonish at times. Overall though, he is effective in portraying the struggling Oliver Barrett IV.

Charles Pistone is the epitome of loving Italian father in his portrayal of Jenny’s father, Phil. His affection for Silber is more than believable. A 7-member ensemble plays Jenny and Oliver’s friends and classmates as well as other random characters. The ensemble’s understated acting is appropriate for this chamber piece and its singing is technically proficient. However, I would have preferred a stronger emotional connection to songs like “What Can You Say?” This song is sung at Jenny’s wake by her friends and family and the concert-like singing of the song, though possibly a directorial choice, was largely devoid of emotional intent. Thankfully, however, it wasn’t too maudlin.

Stephen Clark’s book and lyrics (with additional lyrics from Howard Goodall) are very sappy and some of the rhyming lyrics are more than groan-worthy. The best example of this is the entirely too long and repetitive “Pasta” song. Here, Jenny and Oliver comment on their financial struggles as a young married couple, and how they make pasta for nearly every meal. It’s lighthearted, but ultimately fails to convey any point. Broadly speaking, however, the book and lyrics do capture the overall intimate tone of the story.

Howard Goodall’s music is one of the strongest (if not THE strongest) components of this theatrical piece. The quiet and intricate melodies are mostly rapturous. The emotional duet “Everything We Know” is the strongest from a music standpoint, but nearly every song is beautiful and interesting with common musical themes running through each of them The score is played with precision by a delightfully string-heavy, small orchestra under the direction of Douglass G. Lutz (who also serves as  the vocal director).

The minimalist approach to sets (Peter McKintosh), lighting (Shon Causer), sound (Will Pickens), and costumes (Colleen Grady) is a good one. All of the design elements do well to add ambience, but are not so intricate and elaborate that the audience’s attention is focused on the design elements rather than the music and the story.

I’d recommend this production for lovers of new, smaller, contemporary musicals and for those with an affinity for romantic stories. I’m glad I made the trek to Philadelphia to catch this piece and look forward to any future attempts by Walnut Street Theatre to bring lesser known new works to the area.

Running Time: One hour and 50 minutes with no intermission. 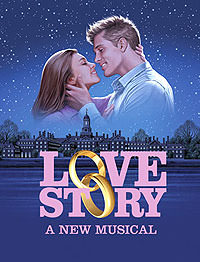