Although we will be celebrating our 30th Anniversary in 2013, with our original three founders still actively involved in all aspects of the company, we are still trying to find ways of reinventing ourselves, or at least mixing it up a bit. For our new season we have given our website a new look, hopefully making it quicker and easier for patrons to find the information they need. Even more exciting is that we have replaced our old ticketing service and, by doing so, have eliminated the ticket service fee that tacked an extra $2.00 onto our $10.00 Main Stage ticket. As our goal has always been to keep our prices affordable for the young families that make up the bulk of our audiences, we are extremely proud to offer online ticketing at no extra cost to our patrons. No service fee ticketing also applies to our Tiny Tots shows.

We are also reaching out to the Latino/Hispanic community, and showing off the work of some of friends, who happen to be some of the best puppet masters in the business.

We are currently presenting the legendary Bob Brown Puppets as our season opener, in their production Carnival of the Animals.  Master puppeteer Bob Brown himself performs, and I have the privilege of performing with him on the Puppet Co. stage. My history with Bob goes back well over 50 years. My father gave Bob his first job in puppetry, and when I was in the hospital for surgery trying to restore vision in my left eye, the 18 year-old Bob would send me letters from my imaginary friend Gobi (I was five), with wonderful illustrations of Gobi’s day-to-day activities.

Bob Brown is also the star of our regular Tiny Tots @ 10:00 series, which we present to the “Carriage Trade” (0 – 4 year olds arriving in strollers).  On select Wednesdays, Saturdays and Sundays, Bob single-handedly enchants full houses of the little tykes with 30 minutes of musical variety featuring farm animals, penguins, pandas, bunnies, clowns, and creatures that defy description.

Carnival of the Animals is something for the “Tots’” older brothers and sisters, and was conceived, written and directed by Bob’s wife and partner Judy Barry Brown, originally for the National Symphony Orchestra. Bob created the puppets with another master puppeteer, Don Becker. It was Puppet Co. CEO Allan Stevens that suggested bringing the piece to the Puppet Co. stage as a bilingual production in honor of National Hispanic Heritage Month (September 15 – October 15). The Puppet Co.’s own Christian Beltran is fluent in both English and Spanish, and collaborated with Ms. Brown to translate her script.The show contains larger-than-life-size puppets that illustrate the musical vignettes of Camille Saint-Saëns’ work, created for his most promising students. Many of the puppets are worked in tandem by Bob and myself, while others are operated with strings, rods, or held directly by the puppeteers. Two of the most popular numbers are performed in “black light,” in which ultra-violet light fluoresces special paint while leaving all else, including the puppeteers in total darkness.  The effect is not unlike some of the special lighting acts on “America’s Got Talent,” and enjoys the same reactions from Playhouse audiences.

Beauty and the Beast is next, and again the original production comes from a source other than the Puppet Co.  Terry Snyder, of Richmond, Virginia was the creative head of the original production, overseeing the script, puppets, costumes and sets with a team of talented individuals. When he took the show on tour for the last time, he asked MayField Piper, General Manager of the Puppet Co. (and my own dear wife), to perform with him. The tour was a success, and it was decided to bring the production to the Puppet Co. stage.  MayField stayed in the show, and rather than Terry commuting from Richmond, Eric Brooks (most recently in “Little Shop of Horrors,”) partnered with her.Brooks added a new character to the mix, a sassy magic mirror narrator who befriends and guides Beauty throughout the story, animated via a video projector.

Terry Snyder is currently dividing his time between costuming a production in Richmond, and working in the Puppet Co. studio to refurbish the costumes and puppets for this season’s production of Beauty and the Beast.

This year marks the 24th Anniversary of our production of The Nutcracker.  It was originally produced for and performed with the Arlington Symphony, and adapted to the Puppet Co. stage the following year. We honestly had not intended to run it every single year since, but the response from audiences and critics was so overwhelming that we literally had no choice. It is now, and I can say this without overly boasting, a Washington tradition. Families attend year after year as part of their holiday celebrations, and we now have patrons who saw the show when they were children bringing their own children.

A large part of the success of our production is that, although we use the same Tchaikovsky composition as every ballet company in the country, it is not dance based. The movement of the characters flows from the music, but every gesture in Act One is aimed at illustrating the storyline, rather than the line of leg and arm. This not only gives us a lot of artistic freedom, but also makes the production very accessible to children. Act Two lets us show off what puppets do best, and we pull out all the stops: We play with scale using giants and fairies, Mother Goose presides, snow falls, a magic carpet flies, and yes we have flowers that actually dance ballet.

Toyland, is based on Victory Herbert’s operetta, Babes in Toyland, and is wholly a Puppet Co. production. The music is so charming, and the plot so silly that it is a joy to perform and to hear the squeals of delight from the children when the spider tries to catch the fairy butterfly, or the Crooked Man and his Crooked Cat try to catch the Toymaker in a net (not to be confused with Annette, who was in the Disney Babes in Toyland). Toyland was also the first production in which we combined a live actor with puppet characters; a conceit that plays extremely well and that we have continued to work into other productions.

Alice in Wonderland is one of our newest productions, and comes on the heels of a failed production of the other Alice book. We created Through the Looking Glass, in 1985, choosing it because we felt it was a much warmer book than the original. In the first book the characters are antagonistic toward Alice, in the second they help Alice to become a queen. It was that process, so essential to the plot, of working through the chess game to become queen that we could not manage to convey successfully, and we sadly removed Looking Glass from the repertoire. Oh, and it didn’t sell tickets!

Alice in Wonderland, on the other hand, is a much more familiar title and we found ways of getting around the sharp edges of the plot.  Making the Queen of Hearts an actual playing card, literally a very two-dimensional character, helped immensely.  We also made the Duchess and Cook, who sing of beating the baby, a Punch and Judy show, very broad and the baby holds its own, at least until it turns into a pig. The Mad Hatter is truly mad, in a zany sort of way, and imagines himself to be the March Hare as well, constantly refuting himself as he parades about in bunny slippers. The Griffin and the Mock Turtle perform The Lobster Quadrille as a vaudeville act.

Another challenge was conveying some of the literary humor of Lewis Carroll.  A parody of You Are Old, Father William, by Robert Southy makes no sense to today’s fourth and fifth graders, and even many adults ascribe the original poem to Carroll himself.  Therefore, we parody what is arguably the most commonly known poem to today’s youth Mary Had a Little Lamb:

Mary had a little lamb,
Its fleece was black as soot.
And, into Mary’s bread and jam,
His sooty foot he put!
(It goes on).

Though primarily a marionette production, the hand puppet show within a show, a mouth puppet caterpillar atop a six-foot tall mushroom, rear projected scenery and other visual surprises keep audiences entertained as we expose them to some of wit of Lewis Carroll’s 1865 novel.

I grew up loving the wide range of “Jack” stories, Jack and the Beanstalk being my favorite. So, naturally our production holds a special place in my heart. My one great problem in writing the script was that I did not want Jack to be a mere thief, as in the original tales, yet I had to keep the iconic elements; the golden eggs, the hen that lays them, and the magic harp, intact. Also, as one of our earliest shows, it had to be written for two puppeteers, so we didn’t have to hire a third person to perform with Allan Stevens and myself.  I had not met MayField, yet. There was also the matter of the Giant’s wife. She had to interact with both the Giant (me in a large mask) and Jack at different times, and we could not have her speak with two different voices depending on to whom she was talking to at the moment. I decided to make her a mute girl, who was essentially a captive of the giant, bound by her love for her golden harp locked in the Giant’s treasure chest. This called for some very precise manipulation, as she had to mime her words, but the effect captivates children and leads to some funny misunderstandings that bring the plot together.

Cinderella is the icing on the cake. It is the first production in which MayField and Allan collaborated on the costumes, and they were overtaken by the back and forth flow of ideas for making the 17th Century apparel a glory to behold.  It is also the first opportunity I got to act with my new wife, as well as my best friend Allan, and we all knew from the first that our talents meshed in a way we had never seen before. It is certainly a favorite with audiences, even though, or perhaps because we throw in a few modern twists. I decided way back in 1987 that Cinderella was not going to sit around waiting for her prince to come. She stands up her stepmother before she discovers that the man she likes is the Prince, and that he loves her for herself. We knew the twist worked early on, when one mother said to her little girl, “This is Cinderella. Do you remember she wasn’t a dishrag?” To our credit, all three of us kept a straight face until she left. However, the best validation we had was far more recent, when during the show Cinderella makes it very clear she has had enough, and a fifth grader from the audience shouted, “You go, girl!” I’m afraid we all lost it for a moment after that one. Fortunately, the puppets all kept straight faces. 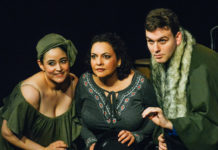 IN Series to build a digital opera house without walls 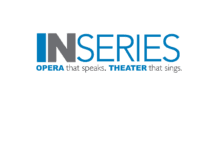 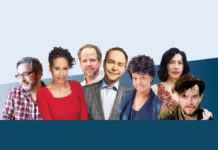