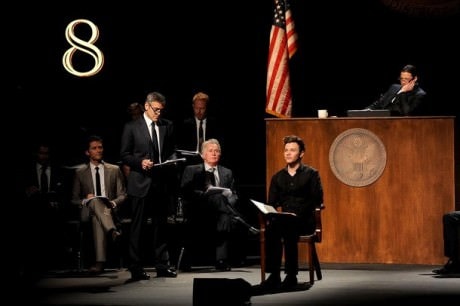 Bay Theatre Company, with license from the American Foundation for Equal Rights (AFER) and Broadway Impact, is proud to announce a one-night-only reading of 8, a play chronicling the historic trial in the federal constitutional challenge to California’s Proposition 8, written by Academy Award-winning screenwriter and AFER Founding Board Member Dustin Lance Black.

8 is an unprecedented account of the Federal District Court trial in Perry v. Schwarzenegger (now Perry v. Brown), the case filed by AFER to overturn Proposition 8, which stripped gay and lesbian Californians of the fundamental freedom to marry.

Black, who penned the Academy Award-winning feature film Milk and the film J. Edgar, 8 based on the actual words of the trial transcripts, first-hand observations of the courtroom drama and interviews with the plaintiffs and their families.

Bay Theatre Company is partnering with Dignity Players and Anne Arundel Community College to present a dynamic reading of 8 on Monday, October 8, 2012 at 8pm. The reading, directed by Steven Carpenter, will be held in the Kauffman Theater on AACC’s Campus. Bay Theatre will be donating a portion of the proceeds to AACC’s Lambda Pioneers Scholarship Fund and Equality Maryland.

Tickets are $8. Following the reading there will be a panel discussion and Q&A with the audience to answer questions concerning equal rights.8 had its much-heralded Broadway world premiere on September 19, 2011, at the sold-out Eugene O’Neill Theatre in New York City. The production brought in over $1 million to support AFER’s efforts to achieve full federal marriage equality.

“People need to witness what happened in the Proposition 8 trial, if for no other reason than to see inequality and discrimination unequivocally rejected in a court of law where truth and facts matter,” said AFER Founding Board Member Dustin Lance Black. “The goal of 8 is to show the world that marriage equality is a basic constitutional right. The facts are on our side and truth always finds the light.  AFER and Broadway Impact are doing all we can to help speed that process along.”

The story for “8” is framed by the trial’s historic closing arguments in June 2010, and features the best arguments and testimony from both sides.  Scenes include flashbacks to some of the more jaw-dropping moments of trial, such as the admission by the Proposition 8 supporters’ star witness, David Blankenhorn, that “we would be more American on the day we permitted same-sex marriage than we were on the day before.”

On February 7, 2012, the United States Court of Appeals for the Ninth Circuit issued a landmark decision upholding the historic August 2010 ruling of the Federal District Court that found Proposition 8 unconstitutional. The Ninth Circuit concluded:

“Proposition 8 serves no purpose, and has no effect, other than to lessen the status and human dignity of gays and lesbians in California, and to officially reclassify their relationships and families as inferior to those of opposite-sex couples. The Constitution simply does not allow for laws of this sort.”

ABOUT THE AMERICAN FOUNDATION FOR EQUAL RIGHTS
The American Foundation for Equal Rights is the sole sponsor of Perry v. Brown, the federal constitutional challenge to California’s Proposition 8. After bringing together Theodore B. Olson and David Boies to lead its legal team, AFER successfully advanced the Perry case through Federal District Court and the Ninth Circuit Court of Appeals. The Foundation is committed to achieving full federal marriage equality for all Americans. www.AFER.org

ABOUT BROADWAY IMPACT
Broadway Impact is a grassroots organization of the theatre community and its fans mobilized in support of marriage equality. In direct response to the passage of California’s Proposition 8 in November 2008, Tony Award-nominees Rory O’Malley (The Book of Mormon) and Gavin Creel (HAIR) and Production Coordinator Jenny Kanelos founded Broadway Impact to engage the theatre community in the fight for marriage equality. Recent initiatives include: contributing to phone bank efforts to win marriage equality in New York State; creating an awareness program that led to a 3,000 piece letter writing campaign; facilitating the attendance of 1,400 supporters to the National Equality March in Washington, D.C.; and producing a rally for over 5,000 attendees in Midtown Manhattan. Broadway Impact is now committed to bringing 8, a play about Proposition 8 written by Academy Award-winner Dustin Lance Black, to university and community theatres across the country in order to inspire dialogue, understanding and action concerning marriage equality. Broadway Impact was the recipient of the 2009 Human Rights Campaign Community Award and proudly operates under the entity of Broadway Cares/Equity Fights AIDS. 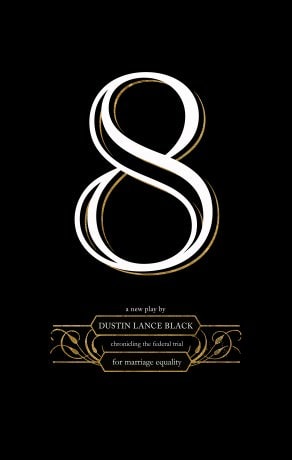